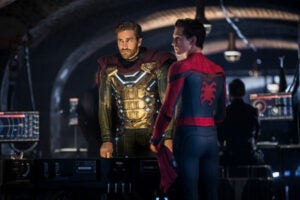 ‘Spider-Man: Far From Home': How Realistic Is Mysterio’s Illusion Technology?

Power Women Breakfast NYC: ”It’s time to move on and do the work,“ CBS News veteran says of the network’s post-#MeToo situation

Norah O’Donnell said Tuesday she wouldn’t be the new “CBS Evening News” anchor if not for the network’s recent upheaval.

O’Donnell, who takes over on July 15 as the anchor of the network’s evening newscast, spoke at TheWrap’s Power Women Breakfast NYC about how CBS has changed its corporate culture since the ouster of CEO Les Moonves, “CBS This Morning” co-anchor Charlie Rose and others.

At the event, she credited CBS News President Susan Zirinsky for moving swiftly to make big changes at the network, including promoting her from “CBS This Morning” to anchor and managing editor of the weekday evening newscast. “It’s a new era at CBS News,” O’Donnell said. “It’s time to move on and do the work.”

Also Read: Power Women at a Time of Challenge - On Pushback and Where We're Headed

O’Donnell also emphasized that she had been “treated very fairly” at the network, adding that she found journalism to be “a great field for women.”

She also defended the media from accusations of “fake news,” noting that in the age of smartphones, consumers have constant access to information. People are “bombarded,” she said, which is where journalists come in: The “filter” of journalists — as she said President George W. Bush called it — is designed to sort through the overload of information and pull out the facts.