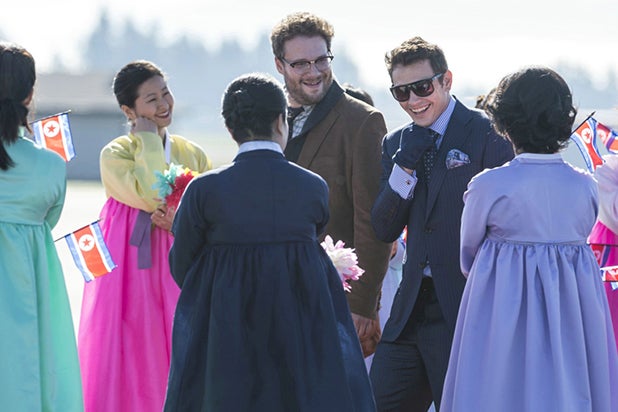 North Korea on Sunday slammed the United States for slapping economic sanctions on it in the wake of the cyberattack on Sony Pictures.

A spokesman for North Korea’s Foreign Ministry on Sunday denied any role in the breach and accused the United States of “groundlessly” stirring up hostility. The sanctions show America’s “inveterate repugnancy and hostility toward the DPRK,” the official added, referring to the country’s official name, the Democratic People’s Republic of Korea.

The harsh words were the latest chapter in the twisting saga of “The Interview,” the controversial Seth Rogen-James Franco comedy about a plot to assassinate North Korean leader Kim Jong-un. Despite doubts by some security experts, U.S. officials believe North Korea is responsible for the massive hack attack on Sony Pictures in November.

“The policy persistently pursued by the U.S. to stifle the DPRK, groundlessly stirring up bad blood toward it, would only harden its will and resolution to defend the sovereignty of the country,” the North Korea spokesman said.

The U.S. on Friday sanctioned 10 North Korean government officials and three organizations, including Pyongyang’s primary intelligence agency, in what the White House described as an opening move in the response toward the Sony cyberattack.

Sony released “The Interview” in 331 theaters on Christmas Day, after terror threats against theaters showing the film caused the cancellation of its nationwide release. The major exhibition chains boycotted the limited debut after Sony made the film widely available online at the same time.

U.S. investigators have reaffirmed their belief that North Korea or its agents were behind the attack, though questions have been raised by some experts who have suggested a Sony insider may have helped.

The exchanges between the U.S. and North Korea have become heated. Questions also remain about who was behind the recent shutdown of Internet service in North Korean. The U.S. has never said whether or not it was responsible. But North Korea blamed Washington and called President Obama”reckless” and a “monkey in a tropical forest.”