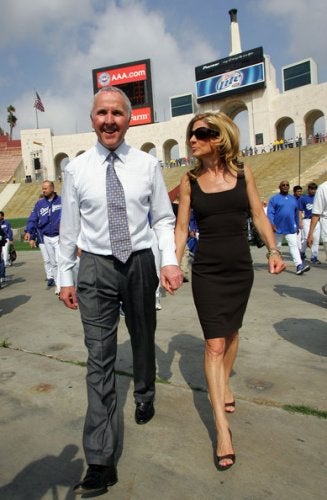 Dodgers owner Frank McCourt, who fired his wife for having an affair with a team employee, is now accused in an anonymous letter sent to her lawyers of doing the same, TheWrap has learned.

The note — which Jamie McCourt’s lawyers intend to introduce in court as part of the couple’s ongoing divorce battle — reveals detailed information about an alleged relationship with a Dodgers employee. The person’s identity was redacted in the copy obtained exclusively by TheWrap, but was known to its recipients.

“[Redacted] was first upset by his overtures and then felt guilty but then succumbed to his advances,” reads the letter.

(Read the full text of the redacted note here.)

"Perhaps the letter writer has another person in mind," Grossman told TheWrap. "It’s unfortunate that Jamie McCourt’s lawyers would spread such a rumor. Most lawyers would recognize that such letters belong in the trash bin and not the media."

Bertram Fields, a lawyer for Jamie, said the letter was sent to him anonymously but contained enough specific detail to be credible.

“If this letter is true, and it sounds like it might well be, it’s not a question of his having affair; if it’s true he’s a gold- 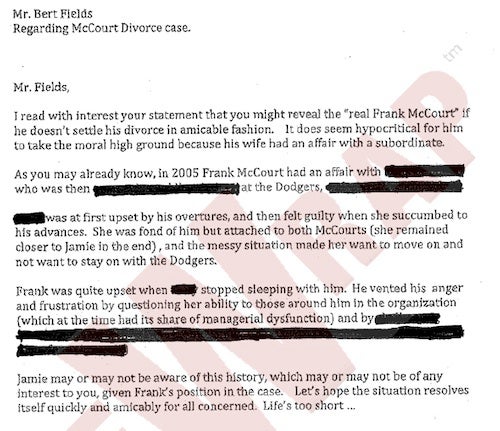 medal winner for hypocrisy,” Fields said.“I think this is a guy who trashed his wife of 30 years claiming that she had a relationship with someone in the Dodgers organization. It’s about time people decided for themselves who’s right and who’s wrong.”

Frank has previously maintained the posture of wronged spouse. His legal team claimed that he had sufficient grounds for firing Jamie as the ball club’s chief executive in October because she had an affair with her driver, who was also a Dodgers employee.

Calling Frank’s charges "hypocritical," the letter provides salacious details of the affair, saying that the woman’s torn loyalties between the couple and feelings of guilt over the affair made her end the relationship and want to move on from the organization.

After she stopped sleeping with Frank, the note charges that the Dodgers owner responded by " … questioning her ability to those around him in the organization."

The note was faxed to Fields’ office and came across the lawyer’s desk a month ago. No return address was included.

"[Jamie] didn’t know about the relationship," Fields said. "He fired her because she had relationship – if he did the same thing, he’s just a world-class hypocrite."

The messy divorce case has drawn a media scrutiny since Frank announced that his 30-year marriage was dissolving last October. Het has hit back against his estranged wife’s claims of co-ownership of the baseball franchise, claiming that she signed away her share of the team.

In recent weeks, Jamie has further alleged that Frank is underreporting his assets by as much as a billion dollars to scrimp on paying alimony.