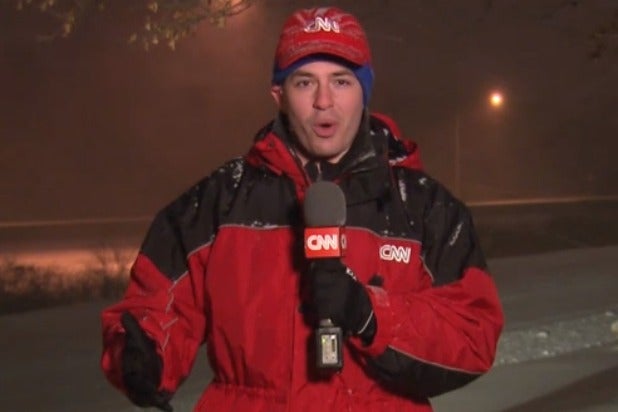 Brian Stelter isn’t one of those media pundits who never leaves the ivory tower. The new “Reliable Sources” host went out into the ivory snow early Friday to do one of the most thankless jobs in TV news, a live shot from the middle of a storm.

You can’t say he doesn’t get his feet wet. Extreme weather dispatches are one of the least necessary services that news shows provide, but the New York Times veteran dutifully delivered the usual no-kidding observations, including: “The story, I think, really is the cold. The cold air temperatures. We’ve got several inches of snow on the ground and as you can see it does blow the snow around out here.”

Yes, yes it does. As anyone in the Northeast could have told you. But still something — convention? Bragging rights? — requires that newscasts send some poor schmoe out into the cold to state the obvious, and on Friday that schmoe was CNN’s media watchdog.

It wasn’t like anyone shoved him out into the snow against his will: A CNN spokewoman noted that Stelter is a self-professed “weather geek” who also occasionally covered weather for the Times.

How would we criticize the critic? Shivering on Long Island, he did as well as anyone can do at one of television’s least essential jobs. But he proved to his viewers and colleagues that he’s willing to go out and do unpleasant work, not just sit behind a desk critiquing others. And his cold-numbed delivery was endearing. So credit where credit is due.