Like all self-aggrandizing entities, the “Now You See Me” franchise (a third film is already in the works) has a lot of nerve.

While it is not built on a previously existing comic book with a fan base waiting to be served, its good guys are a bunch of narcissistic Las Vegas magicians, and its connection to any sort of human reality a thinly stretched piece of Silly String, the first installment nevertheless won over audiences — scoring points with bounce and bravado when the convoluted story unraveled into one impossibility after another. And since that first film concluded with more questions than explanations, another chapter was always the rhinoceros waiting to be pulled out of a hat.

No worries if you never got around to seeing the first film: Thaddeus Bradley (Morgan Freeman), a character who somehow built a career for himself by debunking magicians — as though the public actually believed these people were, indeed, wizards of some sort — narrates a convenient, bare-bones recap of 2013’s “Now You See Me” in the opening sequence. Depending on your investment level, this matters or it doesn’t. OK, let’s just say it doesn’t.

Having spent the first movie robbing from the evil rich in order to shower their audiences with money, a clever trick that both teases a little justice out of the stone-cold world and simultaneously ensures their own act’s popularity pretty much forever, they’ve spent a long time out of the public eye. Now the secret society known as The Eye beckons them to fight another battle.

What’s The Eye? Well, that’s complicated and murky, and the less you know going in, the better. Just know that a new threat to public safety has reared its head, and The Eye doesn’t like it. This time it’s nefarious tech boss Walter Mabry (Daniel Radcliffe, who’s given the film’s best throwaway line, in which he mentions his own youthful flirtation with magic). Walter wants a powerful chip that he plans to use to control all the world’s computers, and he decides to force the 4H team to steal it for him. Working both sides of the legal fence is FBI agent/other Horseman Dylan Rhodes (Mark Ruffalo), a magician’s son with an agenda of his own. Meanwhile, Thaddeus slinks around the margins, waiting to blow your mind. 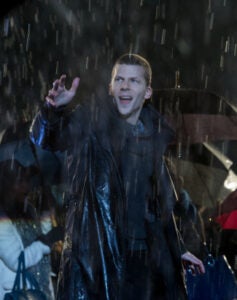 It would be an act of bad faith to give away too many details from a movie about crime-fighting magicians, but much like the first film, the trickery of “Now You See Me 2” involves thoroughly preposterous levels of technical precision, feats of transformation and transportation over great distances at immense expense, surprise reveals, hitch-free stunts, doppelgangers, unseen assistants and faked identities, all bolstered by the kind of wild good luck and staggering synchronization found only in movies.

Director Jon M. Chu has a lighter touch than “Now You See Me” director Louis Leterrier. The latter’s “Transporter” pedigree made sure there was plenty of rugged action, but Chu’s résumé boasts “Jem and the Holograms,” “G.I. Joe: Retaliation,” and more than one film in the “Step Up” franchise. The man knows his cartoons, and that’s a good thing.

To keep the entire enterprise from floating away, cinematographer Peter Deming (“Mulholland Drive,” the upcoming “Twin Peaks” revival) positions most of the onscreen bodies in as much detailed darkness as possible, the better to minimize the utter ridiculousness of their actions.

Ed Solomon returns to screenwriting duties, and his Horsemen, originally coming off as a pack of self-serving careerists, are looking more and more like a less-powerful Avengers, the bickering turned up, the oppressive egos and posturing turned down. The cast follows this lead, and Caplan, in particular, provides a fresh infusion of smart-ass energy into the boy’s club.

The superhero parallels keep coming, and that’s clearly intentional. The film is aware of its place in a cinematic landscape that prefers its crime fighters to have at least some sort of enhanced personal ability. But “Now You See Me 2” knows its heroes can’t save the world, and more importantly, it knows that saving the world keeps getting done to death in other movies, and that no one in the audience expects anything less.

So the film positions itself as a fantasy of minor, more personal justice. Global tech surveillance and privacy invasion, the financial sector’s rigged economy, corporate dominance over ordinary lives: these are the enemies, not comic-book aliens from space, and for the film’s duration, people in street clothes are fighting back and winning. And then they hang out and explain how they did it — which is weird, and no actual magician would ever do it, but it’s a movie so they kind of have to. For their next trick, they make a next trick sound like an attractive prospect.