The Rock and Roll Hall of Fame ceremony is usually an embarrassing thing, fashion-wise. But that wasn’t the case for N.W.A members MC Ren, Dr. Dre, Ice Cube and DJ Yella, maybe the first people in the history of the awards to get the clothes right.

You get a jumble of leather pants and loud jackets, T-shirts and crazy hats and ironic ties that just make you feel like everyone is trying too hard.

N.W.A finally got it right Friday by dressing up their classic look with some smart updates. Here they are: 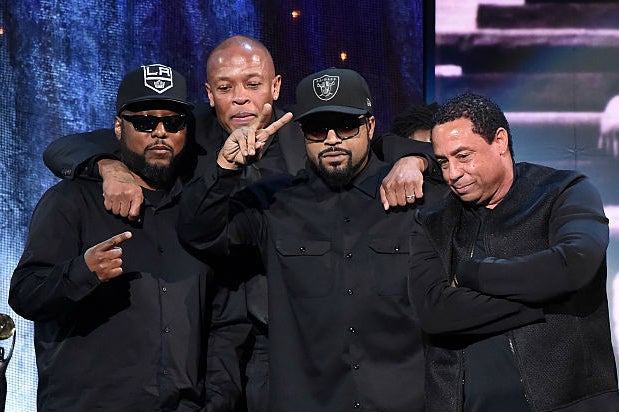 See that “Straight Outta Compton” album cover at the top of this page? That’s from 1988, when N.W.A was already laying the groundwork for their look on Friday: Loose tops, brimmed caps, sporty apparel. It’s timeless. With some gentle variations — nice sunglasses, guys! — they were able to seamlessly step forward nearly three decades.

What can you, an aspiring rock star or rapper, learn from this? Basically, start thinking now about what you’re going to wear to the ceremony 25 years years after you drop your first recording. It’s not a bad idea to just dress all in black, even though it may creep out the other kids at your high school or college or the other lawyers at your law firm.

The best thing about N.W.A and the ceremony: Though they probably would have put on the best performance, they opted not to. As Ice Cube told The New York Times: “We really didn’t feel like we were supported enough to do the best show we could put on.”

Steve Miller didn’t feel too much love, either. (He also went the N.W.A route, dressing up in all black.)

Remember when N.W.A sampled Steve Miller’s “Take the Money and Run” on “Gangsta Gangsta” and “Something Like That” and “Quiet on the Set”? Now they all have something else in common.