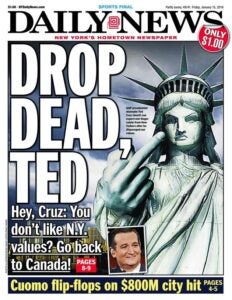 During the Thursday’s GOP presidential debate, Cruz questioned Trump’s conservative credentials by arguing that Trump has New York values that are socially liberal.

“Not a lot of conservatives come out of Manhattan. I’m just saying,” said Cruz.

But Trump embraced his New York roots, invoking the city’s response to the Sept. 11, 2001, terror attacks.

“When the World Trade Center came down, I saw something that no place on Earth could have handled more beautifully, more humanely than New York,” Trump said. “The people in New York fought and fought and fought, and we saw more death, and even the smell of death. Nobody understood it. And it was with us for months, the smell in the air.”

Cruz doesn’t think much of New York’s media, either: He boasted during the debate of his poor relationship with the New York Times, after the paper caught him failing to disclose a $1 million loan from his wife’s employer, Goldman Sachs.

Cruz didn’t say anything about the Daily News at the debate. But there’s always the next one.

Also Read: The 14 Best Insults From the GOP Debate and Celebrity Roast

“I have to tell you, that was a very insulting statement that Ted made,” Trump concluded.

Following the GOP candidate’s call for a ”complete shutdown“ of Muslim immigration, the media has begun to push back — click through to see how