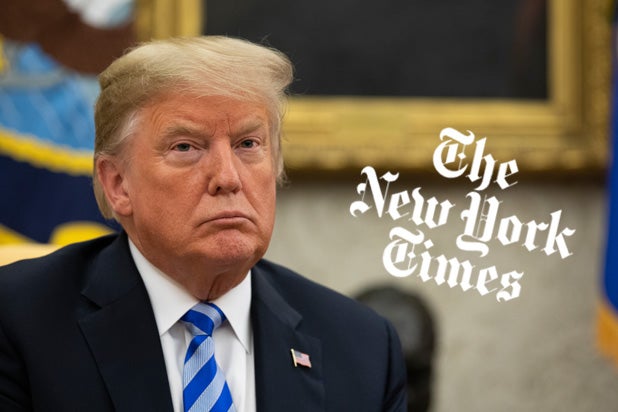 The New York Times came under fire Thursday for its reporting on 2020 voters, especially those who might choose to re-elect President Donald Trump.

On Wednesday, the Times published a piece about voter reaction to the impeachment inquiry into the president. Sabrina Tavernise, one of the bylined reporters, linked to the piece in a now-deleted tweet and said she spoke to “swing voters” who were “repelled” by talk of impeachment. Using that tweet as a jumping-off point, Victory Fund’s Matt McDermott criticized the Times for citing die-hard Trump supporters and not actual “swing voters.”

“No, the New York Times did not talk to six ‘swing voters about impeachment. The article quotes a handful of devout GOP voters who the NYT has repeatedly interviewed multiple times,” McDermott tweeted, quote-tweeting the “swing voters” tweet from Tavernise. “The NYT article includes an interview with Donna, presented as a swing voter who doesn’t favor impeachment. The problem? NYT interviewed the same woman last year. She voted for Trump and the Republicans again in the Midterm. This isn’t a swing voter.”

Even more notable than Donna Burgraff was Tricia Hope. McDermott, like others, pointed out that in the article, Hope is identified as someone who has attended 23 of Trump’s Make America Great Again rallies.

“The NYT article also includes an interview with Trisha, who admits she’s been to 23 Trump campaign rallies. 23! She wrote a book about Trump! NYT has interviewed her at least twice in the past two years,” he wrote. “She’s a Trump fanatic, not a swing voter.”

Other interviews with Hope are, in fact, found here and here.
The Economist’s Gady Epstein wrote, “Among NYT’s 6 ‘swing voters’ supposedly ‘repelled’ by impeachment: a woman who’s been to 23 Trump rallies, another woman who voted for Trump and then voted GOP in midterms, a guy in ‘Trump country’ with a Robert E Lee portrait in his house. Just typical swing voter Americans!”
A representative for the Times did not immediately respond to a request for comment, but Tavernise did weigh in on Twitter.
“I deleted a tweet I wrote last night that didn’t give the full picture of the story I helped report yesterday with 9 colleagues on voters’ reaction to impeachment,” wrote Tavernise. “There were a range of views from all over the country. It wasn’t focused on swing voters.”