After a two-hour-plus delay due to thunderstorms on Saturday night, music mega-producer Clive Davis’ star-studded “We Love NYC Homecoming Concert” in Central Park was canceled.

A rainstorm that came as Hurricane Henri moved up the East Coast cut short a concert that was expected to last about five hours — just as Barry Manilow was on stage singing “Can’t Smile Without You.”

The roughly 22,000 attendees were asked to exit Central Park and seek shelter — but the storms continued before organizers canceled the remainder of the performance. 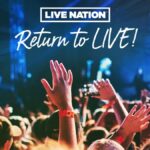 But headliners such as Bruce Springsteen, Patti Smith, Paul Simon and Elvis Costello were still waiting in the wings to close out the show, which was billed by New York City Mayor Bill DeBlasio as a city-wide celebration of the end of COVID. (The concert was announced in June, when infection rates were still low and vaccination rates rising — and before the Delta variant of the virus gained traction.)

CNN anchor Anderson Cooper, whose network was airing the concert live, was forced to vamp on air when the concert was halted. He interviewed The Killers, another act that was waiting to perform, who offered a backstage rendition of their hit “Mr. Brightside.”

Cooper also interviewed Manilow, who gamely delivered an impromptu version of another one of his hits, “I Made It Through the Rain.”