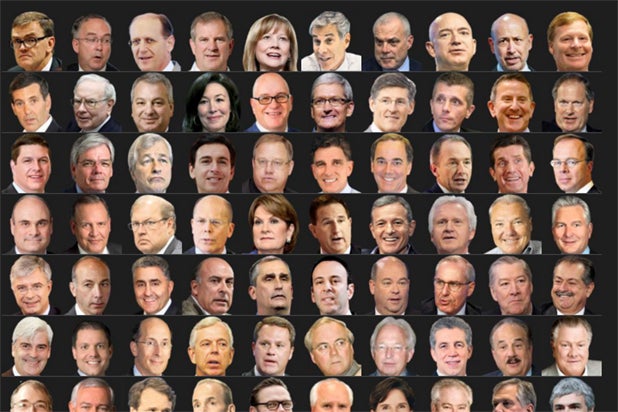 The New York Times’ recently-published analysis of racial diversity among the country’s most powerful executives and elected officials also highlights another truth: Women are highly underrepresented at the highest echelons of power.

The paper’s examination of the 503 “most powerful people in American culture, government, education and business” found only 44 people of color, but by TheWrap’s count, women don’t fare much better.

Of the entire group of business leaders, media executives and politicians, just 69 of the 503 are women. That’s 13.7 percent.

Also read: 41 Hollywood Diversity Stats From All Those Studies You Probably Haven't Read

The biggest category, the CEOs of the most powerful companies in the country, contains just eight women out of 102 leaders, putting female representation at 7.8 percent.

And of the most powerful people in film, television, music and publishing, that number never exceeds 35 percent. Women fared best in publishing, but of the top 20 people from Billboard’s Power 100 list, only one was a woman.

But perhaps most shocking, of the 13 top leaders of newspapers and TV news networks, there are zero women. Of the 13 people “who decide which stories to cover and how to do so,” 100 percent are men.

See the complete breakdown by category below:

Hollywood Executives Who Choose Which Movies Are Made: 4/20, 20%

People Who Wield the Most Influence Over Which Books Americans Read: 7/20, 35%