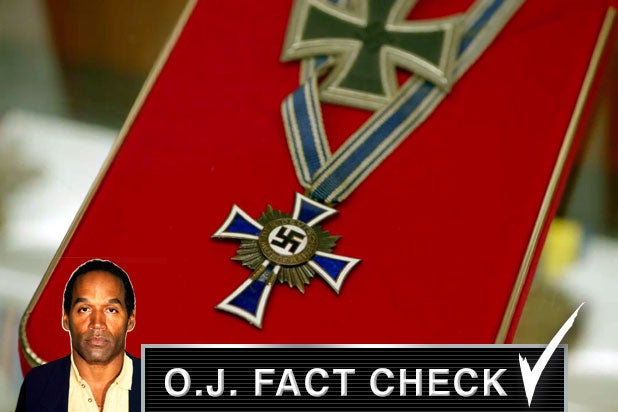 Episode 5 of “The People v. O.J. Simpson” ends, shockingly, with L.A. police Detective Mark Furhman looking reverently upon a Nazi medal. It’s the first moment that foreshadows how devastating Fuhrman’s racism will be for the case against Simpson.

It also feels too on-the-nose to possibly be true. But is it? Welcome to O.J. Fact Check.

BUT FIRST, A FEW WORDS FROM MARK FUHRMAN

“At this late date, FX is attempting to establish a historical artifact with this series without reaching out to any prosecution sources,” he complained.

Darden wrote in his book, “In Contempt,” that Fuhrman told him, in a roundabout way, that he collected Nazi medals. Here’s an excerpt, via Newsweek:

“What are your hobbies?” I asked.

“What kind of memorabilia?” I asked.

He shifted in his chair.

“Well, don’t take this the wrong way, but I collect German medals.”

Fuhrman had some medals, according to one of those “prosecution sources” he’s so fond of.

The upcoming episodes of the show make Fuhrman look even worse. And Furhman can’t contest the things the show has him saying on tape… because he said them on tape.