The first time we see Johnnie Cochran in FX’s “The People vs. O.J. Simpson,” the attorney is going through his closet, trying to choose from among his many flashy suits.

“What about lime green?” his wife asks.

“Lime green. That would be exceptional,” says Cochran, played by Courtney B. Vance. “Except that I’ve got to run out to Neverland. Michael’s got some new pile of commotion. So I can’t wear lime. Michael’s afraid of that color. I’ve never met someone with so many phobias.”

Welcome to O.J. Fact Check, in which TheWrap looks into the accuracy of FX’s captivating ten-part series. “O.J. Simpson” is not intended as docudrama, but there’s enough truth to it that it’s hard to tell what’s true and what isn’t. Today, we look at the big question from our introduction to Cochran:

Obviously, the most important question of the whole series.

It tells us a lot about Cochran: He’s rich, image-conscious, and travels in celebrity circles. But it also suggests, offhandedly, that the King of Pop was afraid of colors that pop.

Exhibit A: “As far as I know MJ never had any color phobias,” J. Randy Taraborrelli, author of “Michael Jackson: The Magic and the Madness,” told TheWrap. “I think that’s just a joke.”

Exhibit C: If Jackson truly feared lime, he came close to the edge of danger with this outfit: 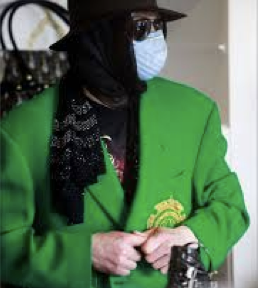 Exhibit D: And then there’s this.

The idea that Jackson was afraid of lime green appears to be a harmless joke. But that joke may tell us something else about Cochran: That he might, just might, have occasionally stretched the truth for the sake of a good story.