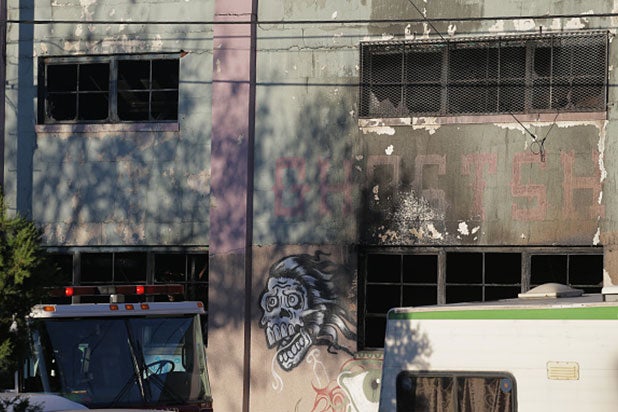 A fire which killed at least 9 people at a rave in Oakland, Calif. on Friday broke out at a building known to residents and neighbors as “the Oakland Ghost Ship.”

The building is a large warehouse that has a skull and other artwork painted on the outside, SF Gate reported. The complex inside is made up of hand-built work spaces for musicians and artists.

The publication spoke to Al Garcia, an owner of a business across the street from the Ghost Ship, who said he had feared in the past that the space was a fire hazard due to the amount of debris lying around. The people that lived there have been trying to clean it up, he said.

“People have been living inside, and the neighbors have complained about it,” he said. “Some of these young people that were in there were underage. They frequently had parties there.”

Oakland Fire Chief Teresa Deloach Reed said Friday that she had heard reports that people had been living in the conclave although they didn’t find any bedrooms. It wasn’t clear how many had resided there — if any at all — according to CNN.

Reed said that perhaps up to 100 people were in the building when the fire started. Most of the deceased were on the second floor because there was only one way down via a stairway made of pallets, according to CNN. Taylor Selby, who had been to the Ghost Ship several times, spoke to SF Gate about the staircase.

“It was this wonky, winding staircase,” Selby said. “It wasn’t even stairs in some places, just like planks of wood. Obviously, it was all hand-made.”

She added, “That place, it was just out of this world. It was like walking into another dimension in there. Like you weren’t even in Oakland.”