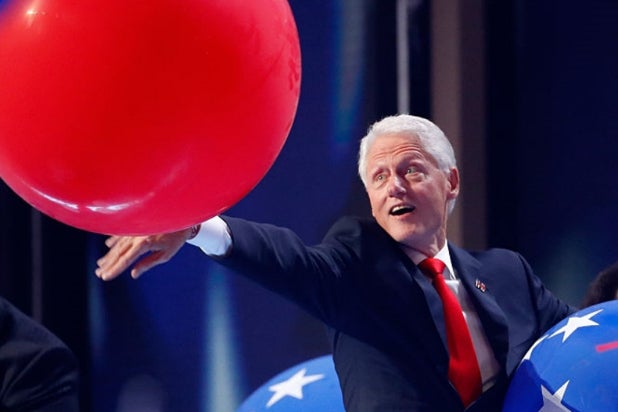 Bill Clinton’s birthday message to President Obama — “Hope you get some balloons. I love a good balloon” — reads like a missive from a David Lynch movie if you missed the Bill Clinton balloon meme of one year ago.

Yes, it was almost exactly a year ago that Clinton joined his wife, Hillary Rodham Clinton, onstage at the Democratic National Convention as she was named the party’s presidential nominee — and took obvious delight at the many balloons floating down to the stage.

Of course, Donald Trump’s election popped the balloon of everyone at the convention hall — but that’s no reason Bill Clinton can’t wish Obama a happy 56th birthday.

A confession? I’m one of the people who initially had no idea why Bill Clinton was talking about balloons, until I was educated by more meme-savvy folks.

Bill Clinton and Obama have had their differences in the past, notably when Obama wrenched the Democratic nomination from Hillary Clinton in 2008 — but it was delightful to think that perhaps at some point the two former presidents met in the Oval Office, struggled for topics of conversation, and settled on their shared childhood love of balloons. Or — why the hell not — their adult love of balloons. Let them like what they like.

But no, it seems like Bill Clinton was simply referencing the thing for which he’s most beloved: the short-lived balloon meme of Summer 2016.

It’s a fair bet that many others on Twitter also had no idea what Clinton was talking about, given the number of Bible verses inexplicably posted in response to the balloon tweet. Why not meet one non sequitur with another?

Happy Birthday, President Obama. Hope you get a balloon, or something you actually want.