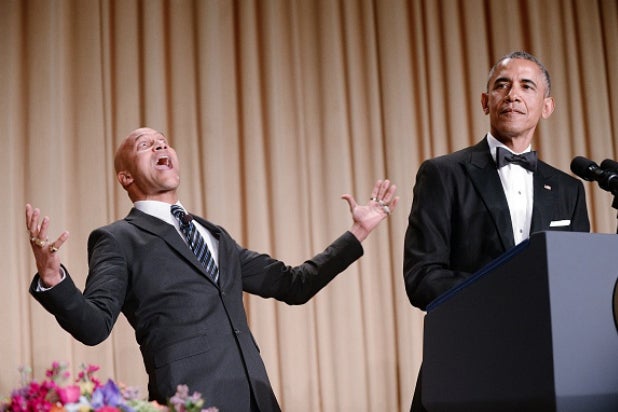 ‘Saturday Night Live’s Cecily Strong may have been the headliner at tonight’s White House Correspondents’ Dinner, but it was the President of the United States who had the media, politicians and Hollywood elites rolling in the aisles.

President Obama opened with a risque spin on what his opponents criticize as a devil-may-care attitude in the twilight of his two terms in office.

“I am determined to make the most of every moment I have left,” Obama said. “After the midterm elections, my advisers asked me, ‘Mr. President, do you have a ‘Bucket List’?”

“I said, ‘Well, I have something that rhymes with ‘Bucket List,'” he joked, letting the four-letter-word reference sink in. “Take executive action on immigration? Bucket! New climate regulations? Bucket!”

The president took jabs at his adversaries, like House Speaker John Boehner and former vice president Dick Cheney, who criticized Obama as “the worst president of [his] lifetime.”

“Which is interesting, because I think Dick Cheney is the worst president of my lifetime,” Obama zinged.

Obama proved he pays attention to cable news ratings, too.

“The polar vortex caused so many record lows they renamed it ‘MSNBC,'” he said, tweaking the low-rated network.

But the real fire started when surprise guest Keegan-Michael Key showed up in character as the president’s “Anger Translator” Luther, from Comedy Central’s “Key & Peele.” Those in the audience who understood the gag seemed few and far between, but everyone got on the same page when Obama shook off his aloof nature to speak fervently about climate change and other issues — which caused even hotheaded Luther to back out.

“All due respect, sir — You don’t need an anger translator, you need counseling,” Luther said, before warning Mrs. Obama that her husband is “Crazy!”

For her part, Strong delivered a much safer routine than the uncomfortable groaners served up by Joel McHale at last year’s WHCD, but the audience stayed on board throughout.

“Fox News has been losing a lot of viewers lately, and may they rest in peace,” she said, joking about Fox’s older viewer demographic.

But Strong did not let corporate bosses at NBC off the hook, especially with a room full of journalists and a big media controversy hanging over the Peacock.

“What can I say about Brian Williams — Nothing, because I work for NBC,” she said, to a roll of laughs.