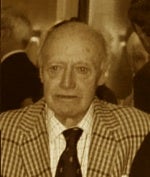 Oscar-winning British cinematographer Jack Cardiff, who was also nominated as a director, died after a short illness in his home at Cambridgeshire in southeast England on Wednesday. He was 94.

As a director, he was nominated for an Oscar for his direction of his 1960 adaptation of D.H. Lawrence's "Sons and Lovers."

Cardiff was one of the first cinematographers to shoot in Technicolor.

He is survived by his wife Nikki and four sons.