The diabolical Dr. No has died.

Joseph Wiseman, who played the sinister title character in the first James Bond movie, was 91. 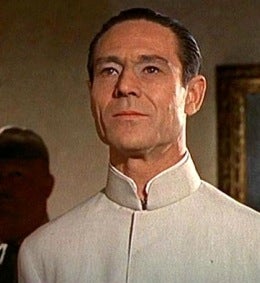 The Canadian-born actor had been in declining health for the last several years, according to his daughter Martha Graham Wiseman.

Wiseman had a long career on stage and screen before appearing opposite Sean Connery in 1962’s “Dr. No.”

He made his Broadway debut in 1938 in Robert E. Sherwood's "Abe Lincoln in Illinois" and later appeared in dramas like “The Tenth Man" and “Detective Story.” His last role was the 2001 revival of “Judgment at Nuremberg,” starring Maximilian Schell.

He moved into film when the latter was adapted for the big screen in 1951. He later appeared in such movies as “Viva Zapata!,”  “The Silver Chalice,”
"The Apprenticeship of Duddy Kravitz" and "The Valachi Papers."

He also was an early adopter to television. Starting in 1953 on “The Armstrong Circle Theater,” he played the recurring role of crime boss Manny Weisbord on the 1980s series "Crime Story" and appeared on everything from "The Untouchables" to a 1996 “Law & Order.”

Ironically, he was best known for playing Dr. No, a part his daughter said he viewed with "great disdain": "He was horrified in later life because that's what he was remembered for," she told the Los Angeles Times. "Stage acting was what he wanted to be remembered for."

"A life being enacted onstage is a thing of utter fascination for me," he once told the New York Times. "And acting, it may begin out of vanity, but you hope that it's taken over by something else."

With a laugh, he added; "I hope I've climbed over the vanity hurdle."

He is survived by daughter Martha, from his first marriage to Nell Kinard, and a sister, Ruth Wiseman. His second wife, choreographer Pearl Lang, died in February