Although no official cause of death is known yet, the man who sat by Carson’s side on “The Tonight Show” from 1962 to 1992 — and who created the iconic phrase “Heeeeeeere’s Johnny!” — has had a number of health problems recently. He had been hospitalized with pneumonia and battled bone cancer. 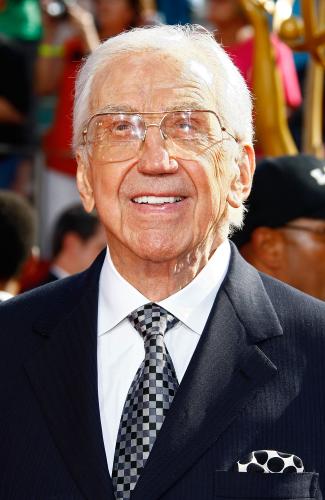 Though known best for his association with Carson, McMahon also hosted the pre-”American Idol” talent hunt “Star Search” and “TV Bloopers and Practical Jokes” and had small roles in such films as “Fun with Dick and Jane” and “Bewitched.”

He has authored two memoirs, “Here's Johnny!: My Memories of Johnny Carson, The Tonight Show, and 46 Years of Friendship” and “For Laughing Out Loud.”

He was born in Detroit in 1923 to entertainer Edward McMahon and his wife Eleanor. He began his career as a bingo caller in Maine when he was 15 and later pitched vegetable slicers on the Atlantic City boardwalk. His first broadcasting job was at WLLH-AM in Lowell, Mass., and he began his television career in Philadelphia at WCAU-TV.

In the early 1950s, he hosted the game shows “Missing Links,” “Snap Judgment,” “Concentration” and “Who Dunnit?” He met Carson when he was hired in 1959 to be the announcer when the young standup comedian replaced ventriloquist Edgar Bergen on the game show “Who Do You Trust?”

When Carson moved up to his late-night talk show, he took McMahon with him. McMahon proved to be the perfect foil for Carson — and one of his trademarks was his hearty laughter at Carson’s jokes.

"You can't imagine hooking up with a guy like Carson," McMahon said in a 1993 interview. "There's the old phrase, hook your wagon to a star. I hitched my wagon to a great star."

Though he had a long, successful TV run, the latter years had not been smooth. In 1995, his son, Michael, died of liver cancer at age 44. In 2002, he won $7 million from his insurance company, charging he had become ill from toxic mold in his home after contractors cleaned up water damage from a broken pipe. And in 2008 he faced foreclosure on his Beverly Hills home when he fell behind on payments because he claimed a neck injury had left him unable to work.

Donald Trump attempted to purchase McMahon's home from the bank and lease it to McMahon, so the home would not be foreclosed. But McMahon chose to deal with a private buyer.

He is survived by this third wife, Pamela, three daughters and three sons.