Patrick Swayze, the actor best known for his roles in "Dirty Dancing" and "Ghost," died Monday after battling pancreatic cancer. He was 57.

Swayze is most-recognized for his role as dance instructor Johnny Castle in the hit 1987 film "Dirty Dancing," for which he received a Golden Globe nomination. 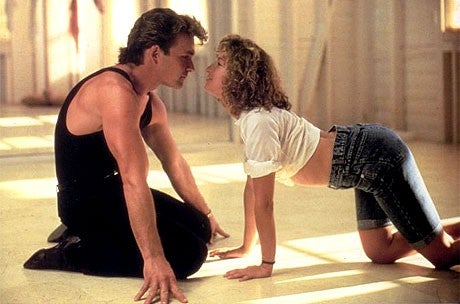 The film centers around an unlikely romance between Swayze and co-star Jennifer Grey during a summer at a 1960s resort in the Catskills of New York.

Swayze's shirtless dance scenes and signature line "Nobody puts Baby in the corner" helped to propel the actor to heartthrob status.

He received a second Globe nomination for playing the ghost Sam Wheat in 1990's "Ghost," in which he starred alongside Demi Moore. That film was the highest-grossing of the year.

In January 2008, Swayze was diagnosed with pancreatic cancer. He had been undergoing chemotherapy at the Stanford University Medical Center in California.

Even after his diagnosis, Swayze continued to shoot a television series for A&E, "The Beast," in which he played a rogue undercover FBI agent. In an interview with Barbara Walters in 2008, he said he refused painkillers while shooting and had only missed a day-and-a-half of the show's filming schedule.

"I do find myself, at the end of the day, riding home sort of catching myself with a smile on my face," he told The New York Times in October 2008. "I'm proud of what I'm doing."

Patrick Wayne Swayze was born on August 18, 1952, in Houston. His father, Jesse, was an engineering drafter and his mother, Patsy, taught dance classes and choreography at her own dance school, where her son was once a student.

He went on to graduate from Waltrip High School in Houston, where he was a talented football player and gymnast. He won an athletic scholarship to college, but knee problems prompted him to take up acting.

On June 12, 1975, he married actress and dancer Lisa Niemi, who had also been a pupil at his mother's dance school.

He continued to study dance and was trained at both the Harkness Ballet School and the Joffrey Ballet School in New York City. He was also the principal dancer in the Eliot Feld company. His first professional dancing role came in "Disney on Parade," where he played Prince Charming.

Swayze's stage debut was as Danny Zuko in the original Broadway production of "Grease." His success in the theater soon led to his first film role in 1979, when he played Ace in "Skatetown, U.S.A." He went on to play supporting roles in a number of TV series and made-for-television movies, though he did star in Francis Ford Coppola's "The Outsiders" in 1983 alongside a number of other prominent eighties actors.

After "Ghost," Swayze found success in his role as a surfing guru/bank robber opposite Keanu Reeves in "Point Break," but his roles in films thereafter were sporadic.

While filming "Letters from a Killer" in 1996, Swayze fell from a horse and hit a tree and was seriously injured with two broken legs and four detached tendons in his shoulder. Filming was suspended for two months and the actor eventually recovered.

He had another close call in 2000, when flying with his dogs in his twin-engine plane. The aircraft was forced to make an emergency landing and hit a light pole. He suffered no injuries.

In recent years, Swayze had a cameo appearance in the "Dirty Dancing" sequel, "Dirty Dancing: Havana Nights," where he played a dance instructor. He also made his London stage debut in the musical "Guys and Dolls" as Nathan Detroit.