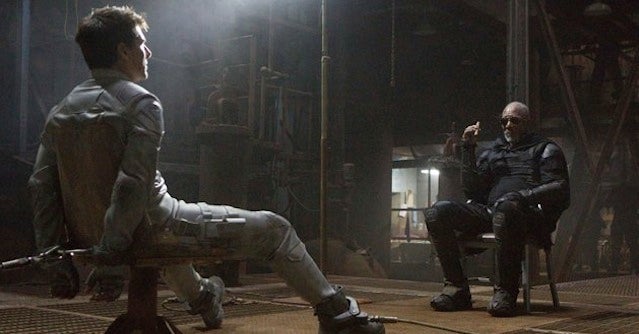 Co-writer-director Joseph Kosinski (“TRON: Legacy”) digs all the way to the back of the refrigerator for “Oblivion,” taking leftover bits of “The Matrix,” “WALL-E,” “2001,” “Moon” and “Planet of the Apes,” among countless other science-fiction classics, and putting them into a slick, shiny and state-of-the-art crock pot.

The results looks amazing, but most of the ideas that resonate will feel very familiar and more than a bit warmed-over. You’ll see one if not both of the movie’s big twists coming, and while a case could be made that “Oblivion” will make the boldest anti-drones statement of any fictional film this year, it’s a chilly movie that never draws you in enough to get fully invested in what’s happening.

Tom Cruise opens the film with a head-spinning torrent of exposition, but it boils down to this: It’s 2077. Sixty years earlier, alien invaders wrecked the moon, destroying much of Earth. What was left of the planet got trashed by nukes used to fight off the E.T.s, and now most of the population lives on a moon of Saturn.

The only people left on Earth are Jack (Cruise) and Victoria (Andrea Riseborough, “W.E.”), who live in a high-tech house in the clouds and whose memories were wiped five years earlier.

He goes out every day to repair the drones that scan the earth for the remnants of the alien Scavengers; she reports their progress to Sally (Melissa Leo, with a ludicrous twang) at Mission Control. Unbeknownst to Victoria, Jack still remembers meeting up with a mystery woman (Olga Kurylenko of “To the Wonder”) at the Empire State Building back before the war.

He’s also built a secret hideaway in the mountains, a lakeside cabin where he can shoot hoops, listen to old vinyl LPs and squirrel away the books he has found in his travels.

One day, Jack happens upon the top of the Empire State Building, which the Scavengers are using as a homing beacon; following the coordinates being sent out, he finds a crashed spaceship, but the passengers aren’t aliens — they’re humans. And one of them is the lady from Jack’s dreams.

This discovery sets in motion Jack’s new understanding of who he is and what has happened to Earth, and “Oblivion” might have worked better if it weren’t so proud of these revelations that most audience members will figure out long before the characters do.

Kosinski is great with the doohickeys — Jack’s transport, his fold-up motorcycle, that house of the future — but neither the plot nor the characters click the way they should. (And I say that as someone who actually liked “TRON: Legacy.”)

Cruise has to spend most of the film playing a literal blank slate, but even after he starts filling in his own memories, the character remains as vague as ever. And poor Morgan Freeman, who turns up late in the film, gets saddled with some astonishingly clichéd dialogue. (That YouTube reel of characters in dozens of movies saying the line, “You look like shit,” just got three seconds longer.) M83’s score is mostly effective, but even it feels unoriginal, like the love child of Daft Punk’s “TRON: Legacy” music and the “Inception” BWAAAAH.

There’s a weirdly sexist tinge as well, with the female characters being either nefarious or inert (not to mention a triangular big bad alien presence that could have been designed by Judy Chicago). “Oblivion” also indulges in one of those have-your-cake endings that are so popular of late; not to give anything away, but this is another movie that promises a gutsy, powerful denouement only to give the audience a reassuring wink and a high-five.

The stink of studio notes and focus groups pervades throughout, in fact — that awkward narration at the beginning shares information that Jack offers up again later in the film; one imagines a test audience complaining that they didn’t understand what was happening, and the studio deciding to overlay all that clunky exposition up front. Just a theory, but I’d put five bucks on it.

If the dialogue and the concepts of “Oblivion” had been as fresh and powerful as its art direction, we’d really have something here. Instead, it’s something borrowed packaged inside something new.