Writer-director Diane Bell’s "Obselidia" has been named the winner of this year’s Alfred P. Sloan Prize at the Sundance Film Festival.

The prize, which carries a $20,000 cash award from the Alfred P. Sloan Foundation, is presented to an outstanding feature film focusing on science or technology as a theme, or depicting a scientist, engineer or mathematician as a major character.

Bell’s first feature follows George (Michael Piccirilli), an encyclopedia salesman, who decides to write the Obselidia, a compendium of obsolete things. As part of his attempt to document nearly extinct occupations, he befriends Sophie (Gaynor Howe), a projectionist at a silent movie theater, who believes that nothing is obsolete as long as someone loves it. Together they interview a reclusive scientist who predicts climate change will eradicate 80 percent of the world’s population by 2100, forcing them to confront the question of how one lives today if the world is going to disappear tomorrow. 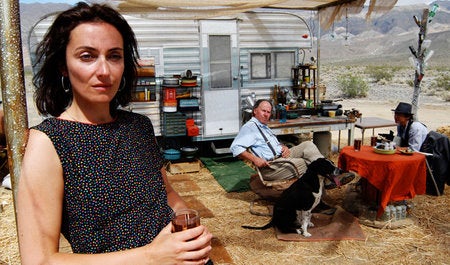 The winning film was selected by a committee of film and science professionals based on the quality of the film’s presentation of science and technology themes and/or characters. This year’s Alfred P. Sloan jury members are Peter Galison, the Joseph Pellegrino University Professor of the History of Science and of Physics at Harvard University; neuroscientist Darcy Kelley; NPR science correspondent Joe Palca; Paul Sereno, a professor at the University of Chicago and Explorer-in-Residence at National Geographic; and actor-director Marianna Palka ("Good Dick").

The Alfred P. Sloan Prize is a major component of the Sundance Science-in-Film Initiative, which is made possible by a grant from the Alfred P. Sloan Foundation. The Initiative supports the development and exhibition of new independent film projects that explore science and technology themes or that depict scientists, engineers and mathematicians in engaging and innovative ways.

The Initiative presents a panel discussion at the festival that brings together scientists and filmmakers to explore compelling, contemporary issues regarding science in film.

In the Sundance Feature Film Program, the Initiative supports the Sloan Commissioning Fund, which provides resources for Initiative projects early in the development phase; and the Sloan Fellowship, which develops eligible projects at the Sundance Feature Film Labs toward production. This Initiative blends the Sloan Foundation’s goal of enhancing public understanding of science and technology with Sundance Institute’s mission to foster independent voices and compelling storytelling in film.