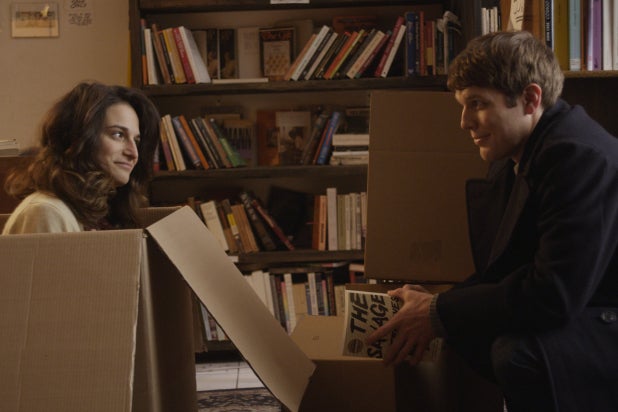 Generally, the topic is considered so radioactive by Hollywood that pregnancy movies as different as “Juno,” “Gimme Shelter,” “Knocked Up,” and even that 1980s chestnut “For Keeps” all mention abortion as briefly as possible before running away screaming and pretending like the discussion never happened. “Obvious Child” refuses that path, acknowledging the reality of young women and what they contemplate when facing an unwanted pregnancy.

Not that the volatile topic is all this movie has in its quiver; the only agenda that “Obvious Child” has is to be true and funny, and it succeeds impressively at both. The feature debut of writer-director Gillian Robespierre (based on her 2009 short of the same name), the film takes an intelligent look at its characters and their lives, even as its comedian heroine relies on stained-panties humor to get laughs onstage.

That comic, Donna (Jenny Slate), has more going on in her life than dirty underwear. The bookstore that provides her day job is about to close its doors, and her boyfriend leaves her for a mutual friend after Donna has revealed one too many personal details about him in her act.

The last thing she’s looking for is a relationship when she has an alcohol-fueled one-night-stand with dorky nice guy Max (Jake Lacy, “The Office”), but one evening of unprotected sex later, Donna finds herself pregnant. (And even if “Obvious Child” had no other qualities, it would deserve kudos for coming up with a new and interesting way to present the peeing-on-a-stick scene that’s become one of contemporary comedy’s strongest cliché magnets.)

What to do next isn’t an easy choice for Donna, but “Obvious Child” allows its protagonist the freedom to explore all her options, and to use the pregnancy as a way to evaluate where she is and where she’s going. There’s no judgment and no preaching; instead, we get a smart but relatively immature 20-something feeling her way through the dark and trying to get to the other side.

Slate, so funny on “Saturday Night Live” and on Comedy Central’s “The Kroll Show,” gives one of those career-defining performances akin to Maya Rudolph‘s breathtaking turn in “Away We Go.” A veteran of sketch and improv, Slate knows where to find the laughs in the character, but she etches a realistically complicated and multi-faceted young woman.

It’s a testament to Slate’s acting that we come to know the character through the different sides of herself that she shares with different people, whether it’s her audience, her best pals (Gabe Liedman and Gaby Hoffman, both delightful), a lecherous fellow comic (David Cross), or her divorced parents (veteran scene-stealers Polly Draper and Richard Kind).

It’s with Max that Donna can finally let down a lot of her urban-comedian guard and share her soft center, and Lacy makes Max an utterly engaging and charming foil to the oft-prickly Donna. Max is the kind of un-hip, non-fast-talking character that another movie (especially another movie set in the world of stand-up) could have turned into a boob, but his sweetness and his kind eyes signal that he’s a great match for a woman with whom he obviously has very little in common.

Don’t let anyone scare you away from “Obvious Child” on political grounds; ultimately, this is a movie about life and how we live it. And how we sometimes tell embarrassing jokes about our drawers.