Warner Bros. and Village Roadshow have found mid-budget box office success with “Ocean’s 8,” the Sandra Bullock-fronted, all-female spinoff of “Ocean’s Eleven” that has opened to $41.5 million from 4,145 screens.

Though the “Ocean’s” trilogy, which came out from 2001-07, posted higher openings if inflation is taken into account, “Ocean’s 8” has the best raw launch in the franchise. As expected, female audiences have shown up in droves to see Bullock, Cate Blanchett, Sarah Paulson and Rihanna pull a heist on the Met Gala. Opening night demographics from CinemaScore show that 69 percent of moviegoers were women over the age of 25, with audiences giving the film a B+, the same as “Ocean’s Eleven.” 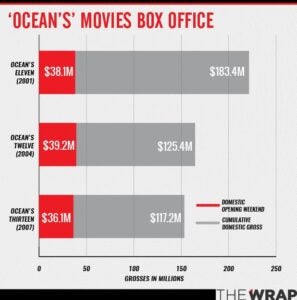 That demographic is expected to sustain the heist film throughout June, even as “Incredibles 2” and “Jurassic World: Fallen Kingdom” are expected to post $100 million-plus openings over the next two weeks. Such long-lasting success is what turned “Ocean’s Eleven” into a trilogy. If “Ocean’s 8” shows similar performance, the $70 million film could have a domestic run of over $160 million.

With a 94 percent Rotten Tomatoes score, “Hereditary” is the latest A24 horror film to earn critical acclaim for its cerebral approach to the genre. But like past A24 release “The Witch” and “It Comes At Night,” opening night audiences found it to be too disturbing, giving it a D+ on CinemaScore.

Far less successful was Global Road’s “Hotel Artemis.” While “Hereditary” polarized those who saw it, critics and audiences found the dystopian thriller starring Jodie Foster and Jeff Goldblum to be just mediocre. With a C- on CinemaScore and 58 percent on Rotten Tomatoes, the film has finished eighth this weekend with just $3.1 million from 2,407 screens.

Finally, “Avengers: Infinity War” stayed in the top five, earning $6.8 million in its seventh weekend in theaters. With this result, the Marvel mega-crossover has a domestic total of $654 million, passing “Jurassic World” to become one of the top five highest grossing domestic releases of all-time. The film will also make history Monday by becoming the first summer blockbuster to gross $2 billion worldwide, as Disney estimates put the film at just $2 million away from that historic milestone.