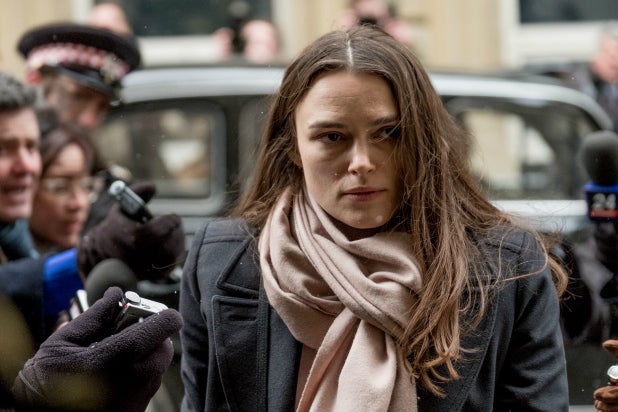 High-minded and sturdy, if never as galvanizing as it should be, Gavin Hood’s whistleblower drama “Official Secrets” follows a string of similarly themed, recent-history docudramas (“The Post,” “Spotlight”) in trying to frame a noble fight as worth waging no matter the repercussions.

And in the real-life case of British intelligence analyst Katharine Gun, played with trademark poise and fierce smarts by Keira Knightley, a consequential impulse to go rogue and do right by millions of citizens in England and Iraq in the pre-invasion buildup put her squarely in the crosshairs of her country’s need to punish those willing to expose the darker workings in the drumbeat to war.

If you don’t know anything about Gun’s actions and subsequent ordeal — highly likely since war happened anyway, and regrettably so since this incident should have helped prevent it — “Official Secrets,” (written by Hood and Sara and Gregory Bernstein, based on a book about Gun’s experience) serves as an efficiently told primer. It’s a historical sidebar of ordinary bravery (Pentagon Papers whistleblower Daniel Ellsberg called Gun’s leak “the most courageous” he’d ever seen) and government hardball.

It’s 2003, and Gun is by day a signals intelligence analyst at Britain’s GCHQ (Government Communications Headquarters). By night, alongside her Kurdish immigrant husband Yasar (Adam Bakri), she’s yelling at the television as American and British leaders trot out faulty justifications for going to war against Saddam Hussein. (In a line sure to resonate in our Orwellian political climate, she blurts out into the ether at Tony Blair, “You don’t get to make up your own facts.”)

So when a classified NSA memo drops into her inbox at work, directing UK intelligence to help the Americans root out compromising material on UN Security Council nations in order to blackmail them into voting on a resolution to go to war, Gun believes the only proper thing to do is alert a calculatedly misled public.

Simultaneously, Hood (“Eye in the Sky”) takes us into the newsroom at the establishment-friendly UK paper The Observer, where stubborn editor Roger Alton (Conleth Hill, “Game of Thrones”) clashes with idealistic political reporter Martin Bright (Matt Smith), war correspondent Peter Beaumont (Matthew Goode) and Washington-based firebrand Ed Vulliamy (Rhys Ifans) over the broadsheet’s coverage of Blair’s coziness with Bush. The discussions intensify when Bright gets his hands on the NSA directive: diligent reporting confirms its validity, but a crafty smear campaign after the story’s publication (led by the Drudge Report, unsurprisingly) serves to dampen its impact in the UK and to ensure its abandonment by a normally piggyback-mad American news media.

At this point Hood effectively drops the media angle to focus on the consequences for Gun, who calmly confesses to leaking the memo and sees her life upended by law enforcement threats, the possible deportation of her husband, and prosecution under Britain’s Official Secrets Act. The onslaught sends her to a civil liberties/human rights law firm, where lawyer Ben Emmerson (Ralph Fiennes) takes her case.

In its outrage-driven bones, “Official Secrets” wants to be all things to all political thriller aficionados: journalism saga, fight-the-system stirrer, paranoid nail-biter and courtroom drama. To that end, cinematographer Florian Hoffmeister (“A Quiet Passion”) gives us suitably shadow-filled London locations, and Hood leans when he can on the score by frequent collaborators Paul Hepker and Mark Kilian.

But where Hood’s “All the President’s Men” ambitions feel forced — there’s even a shadowy meet-up in a parking garage — the second-half machinations pertaining to Gun’s legal peril and eventual defense are duly fascinating, all the way up to what transpires at the Old Bailey at the end. Unless you’re familiar with Gun’s story, how it all played out may surprise even the most genre-hardened experts in climactic trial scenes.

Knightley wears the cloak of flinty heroism around increasing vulnerability well, even if the clockwork screenplay and Hood’s on-the-nose sense of dramatic power often telegraphs a scene’s emotions well before the actors have a chance to bring it to life. The half of the cast playing journalists have their ups and downs — Hill and Goode have more ingrained gravitas than Smith and the overblown Ifans — but once Fiennes enters the picture, his coiled, watchful presence ensures a compelling ride to the conclusion. Even in two ham-fistedly charged scenes on a beach with a chummy prosecutor neighbor played by Jeremy Northam, Fiennes brings a quietly seething, righteous strength.

You’ll certainly know who Katharine Gun is by the end of “Official Secrets,” and the movie makes abundantly clear what the stakes were for her — and will likely always be for lowly informers — going up against a state with something to hide. But when your two-hour history lesson ends, you’re still left realizing that Gun’s efforts didn’t alter the larger history lesson of a bloody, bad war that was still waged without Security Council authorization. That has its effect on “Official Secrets,” too, leaving a capably rendered, urgently argued portrait in courage that never quite rises above curious-footnote status.