When I was a young child and first heard the Hans Christian Andersen tale “The Emperor’s New Clothes,” I relentlessly zeroed in on the spectacle of the king unsuspectingly parading about proudly pantsless –and shirtless, too.

I get the same feeling every time a movie turns on a premise, or tries to pull a plot twist, so patently ludicrous that it is laughable. Why doesn’t everyone else see it?
And I’m not just talking about the folks in the audience.
Exhibit A: “Chloe,” the risible new marital drama-thriller from Canadian director Atom Egoyan (“The Sweet Hereafter”). It’s an English-language remake of “Nathalie,” a 2003 French film by writer-director Anne Fontaine. 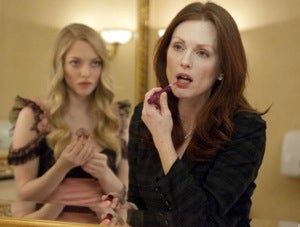 In it, a wife (Julianne Moore) hires Chloe (Amanda Seyfried), a comely young female escort, to tempt her husband (Liam Neeson), whom the wife suspects may be straying.
Uh, lady … ever hear of a private detective? It would cost less and you’d have a lower probability of someone ending up with a sexually transmitted disease.
“Chloe” is from the school one might call Cautionary Marital Tales. The most notable example would be Adrian Lyne’s 1987 “Fatal Attraction,” in which a happily married Michael Douglas cheats over a single weekend with Glenn Close, who proceeds to go psycho on him.
In 2002, the roles were reversed in “Unfaithful,” also directed by Lyne. Diane Lane’s bored suburban housewife repeatedly travels to Manhattan to heat the sheets with a French hottie (Olivier Martinez). When her husband (Richard Gere) discovers the affair and goes to the boyfriend’s loft to investigate, he accidentally kills her lover. Oops.
The “Fatal Attraction” dynamic was again recycled with decent box-office success a year ago in “Obsessed.” This time the twist was that a predatory blond (Ali Larter) relentlessly pursues a happily married black man (Idris Elba). His wife (Beyoncé) eventually shows this would-be rival what’s for in a knockdown, drag-out catfight that leaves her once-happy home literally in shambles.
What these films share is an Us (married couple) vs. Them (would-be lover) mentality. The married couples are always attractive, upper middle class, usually professionals, and live in gorgeous houses (or apartments) right out of the pages of Elle Décor. They are our aspirational selves. We don’t’ want their happy homes to be violated by some scheming hussy or bedroom-eyed Frenchman.
These stories serve as warnings against skirting marital fidelity lest you open the door for the other woman (or man) to become an obsessive nut case. No one is safe from their wrath, even a bunny.
The twist “Chloe” puts on this trope is to give it a same-sex spin. Chloe, it quickly becomes apparent — at least to me, though other members of the audience at the screening I saw, most of them elderly, seemed puzzled right up to the end — is fixated on the wife more than the husband. She has her own agenda, which she is relentless in pursuing.
The marriage between Moore and Neeson’s characters seems joyless and hardly worth saving. And Seyfried is a conniving schemer from the get-go; surely Moore’s character would have twigged to her real motives early on.
The biggest problem, though, is that the film is so grim. The actors play it seriously, looking as if they’re in constant pain. No one winks at the audience, to let us know that they’re aware this is nothing but ripe tripe.
Apparently, all involved thought “Chloe” really was about a marriage in crisis and not an excuse for a couple of attractive actresses to take their clothes off, entwine their limbs and moan together in bed.
Such movies never end well for the interloper, and “Chloe” – SPOILER ALERT – is no exception. These women don’t get to ride off into the sunset with the unfaithful spouse. They’re lucky if they’re still breathing by the time by end credits roll.
All of which tells us what? Cheating doesn’t pay? Marriage is good and worth preserving — no matter how deceitful one of the partners may have been?
Like the “Emperor’s Clothes,” in which nakedness was allegedly a fancy gossamer garment, that’s granting too much significance to such films.
They exist merely to titillate. They’re dirty movies with a veneer of moral underpinnings.
And, really, hiring a prostitute to tempt your husband? That’s a wish-fulfillment fantasy only former New York Governor Elliot Spitzer would buy.
x
Looks like you're enjoying reading