I am decades past sleeping with stuffed animals, but after seeing “Toy Story 3,” I came home and pulled my once plush Mr. Bunny out of a box tucked away high up in a closet.

Other than a bit of stuffing seeping from a split seam at one leg, he seemed in the pink. Well, not quite in the pink — his matted fur is now a dingy gray. 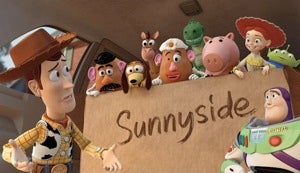 Holding this faded version of Mr. Bunny again made me both happy and sad. It was the same mix of emotions I felt watching “Toy Story 3,” the latest installment of the animated series that so dazzlingly launched Pixar when the first “Toy Story” arrived 15 years ago.

That’s the key to the best of Pixar’s films — the movies can put the adult you in touch with your inner child, even as you view the emotions evoked with a grown-up clarity.

As a child, one’s reactions to most things are simple. Happy. Sad. Mad. Meltdown. Or, as my nephew once memorably complained when he was 3, “I not happy!”

As an adult, our emotions become more complex as our concerns extend beyond the next meal and just ourselves to jobs, family, finances, world affairs, etc.

We come to understand that we can — and frequently do — experience multiple emotions simultaneously, that it is possible to laugh and cry at the same time. Just ask anyone who has been to a memorial service where the humorously endearing antics and personality quirks of the recently departed were recalled.

When a Pixar film fires on all cylinders, it gets to you in exactly the same way. Consider the miraculous silent montage in last year’s “Up,” which showed the decades-long arc of the elderly male hero’s marriage. If you weren’t smiling through tears while watching that, your heart is made of solid granite.

Pixar movies have offered plenty of other similar evocative moments through the years, moments of pitch-perfect emotional distillation: a fish father’s panic at losing his son in 2003’s “Finding Nemo”; parents rediscovering their superhero purpose in 2004’s “The Incredibles”; and cowboy toy hero Woody’s unwavering love for Andy, his owner, in any of the “Toy Story” films.

“Toy Story 3” is about what happens to toys — specifically, Woody, spaceman Buzz Lightyear, cowgirl Jessie and the rest of the familiar gang — when Andy outgrows them. Do they remain loyal to Andy and wait in a box in the attic for the day when he returns from college and maybe unpacks them, or do they find new lives for themselves and transfer their loyalties to new pipsqueak who’ll play with them?

It never quite reaches the heights of the first “Toy Story” or its even better 1999 sequel. The story isn’t as fresh, and some of the emotions feel recycled.

But it’s still more inventive, clever and laugh-out-loud funny than any other movie out there now. Really. And “3” finds its heart as its various threads come together in the final 20 minutes, when the toys — spoiler alert! — survive a harrowing journey through a landfill, are rescued by a literal dues ex machina and learn that life is about change and moving on even as one treasures one’s memories of the past.

The ending is bittersweet. It left the 7-year old sitting next to me bereft. “But I don’t want to give away my toys, ever,” she wailed through her tears.

Adults will have a more complicated reaction. Many will tear up (OK, I did), knowing that the toys finding a new owner is indeed a happy ending but being sad that Andy has to grow up.

Inevitably, though, we all grow up and outgrow our playthings. We discover that there are real villains in the world, not just ones made of plastic, and that the would-be, fleshly versions of Woody and Buzz Lightyear can’t save or fix everything.

It is the wonder of Pixar films that they recognize and put us in touch with that duality: that inside the hardened adult most of us have become lurks that still innocent child, and we long to get back to that more uncomplicated time, even as we know it’s impossible.

Mr. Bunny is still Mr. Bunny, and he’s waiting for me in his box. I guess maybe it really is time for me to give him away.