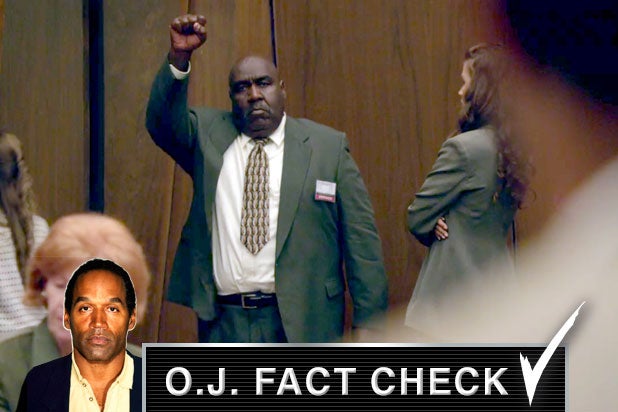 (Spoiler alert: Maybe don’t read this if you haven’t watched the finale of FX’s “The People v OJ Simpson.”)

In one of the most shocking moments of “The People v OJ Simpson” finale, one of the African-American jurors gives O.J. Simpson a raised-fist “black power” salute moments after the not guilty verdict is delivered.

Did it really happen? Yes — and the show left out an amazing detail about the juror. Welcome to O.J. Fact Check.

THE POINT OF THE SCENE
The juror’s salute was an unsubtle reminder of how much the case came to be about race.

THE FACTS
Yes, a juror really did give Simpson the raised fist as he left the courtroom. His name was Lionel (Lon) Cryer, and as The New York Times reported, he was “a former Black Panther whom prosecutors had inexplicably left on the panel.”

I’ll give you a minute to pick up your dropped jaw: Yes, there was an ex-Panther on the Simpson jury.

Here he is in the Washington Post, commenting on the prosecution’s case against OJ:

“It was garbage in, garbage out,” said Cryer, a former Black Panther Party member who raised his left arm in a clenched-fist salute to Simpson as the panelists walked out of the courtroom on Tuesday.

He didn’t just raise his fist. As the Times explained:

Before the verdict was read, the same juror, Lionel Cryer, a 44-year-old black man, had smiled and winked at him.

Also Read: 'People v OJ Simpson' Writers: Finale Is Tragic for Every Character But One

(The “People v OJ Simpson” got one minor detail wrong: In the show, he raises his right fist. It was his left.)

Cryer’s affilation with the Black Panthers was noteworthy, of course, because of the group’s history of clashes with police. Prosecutors might have argued during jury selection that he shouldn’t be chosen for that reason.

But as Jeffrey Toobin notes in “The Run of His Life,” the prosecutors “didn’t even exercise all twenty of their peremptory challenges.”

WHY HAVEN’T I HEARD MORE ABOUT THIS?
Because the courtroom cameras weren’t allowed to record jurors, people at home didn’t see Cryer’s gesture.

THE VERDICT
“The People v OJ Simpson” was completely accurate to show the juror raising his fist. If the show had had more time, it could have raised questions about why the prosecution didn’t keep him off the jury.

Fairly or not, prosecutors often strike potential jurors who have belonged to groups rightly or wrongly perceived as anti-police.

ANYTHING ELSE?
Cryer said in a CNN interview in 2013 that race was not a factor in his decision, and that the prosecution had put on a “very weak case.”

“I had no alternative but to rule for reasonable doubt,” he said.

ONE LAST THING
Soon before the “People v. O.J. Simpson” finale aired, I had the privilege of talking with the show’s lead writers, Larry Karaszewski and Scott Alexander, about how and why they took a few dramatic liberties in the service of their story. You can read their explanations here.

One thing they cheerfully confessed is that Michael Jackson wasn’t really scared of lime green.