“Olaf Presents,” a new series of animated shorts that are set to debut on Disney+ this Friday, began in an unlikely place. It was deep into production on “Frozen II,” which would ultimately become the most successful animated film of all time, and the filmmakers knew that they needed an extra beat – one that was humorous and informative, something that would break up the occasionally oppressive feel of the narrative and inject a moment of pure silliness. So they turned to Olaf (brilliantly performed by Josh Gad), who, teaming with the animators responsible for the character, turned in an unforgettable sequence, where our favorite snowman recounts the events of the first “Frozen.” So memorable was this moment, in fact, that Walt Disney Animation Studios has revisited the idea for “Olaf Presents” – only this time, Olaf is taking on a handful of certifiable Disney classics.

Directed by Hyrum Osmond, who also oversaw the “At Home with Olaf” shorts released last year during the height of the pandemic, “Olaf Presents” sees him tackling “The Little Mermaid,” “Aladdin,” “Moana,” and “The Lion King.” He recounts each movie’s plot, in the most Olaf way possible – getting things wrong, exaggerating others, and using additional characters from the “Frozen” universe (including Marshmallow, the snowgies from theatrical short “Frozen Fever,” and Bruni, the fire salamander from “Frozen II”) to join him in the fun.

“Olaf Presents” is, to some degree, a sort of cross-promotional stunt meant to emphasize the deep bench of Walt Disney Animation Studios classics – all currently available on Disney+! (There’s also a “Simpsons” short debuting on Friday, directed by the great David Silverman, that similarly celebrates the Disney portfolio.) But it’s also much more than that – it’s a true celebration, not only of Disney Animation’s storied history, but of the malleability and universality of its stories. 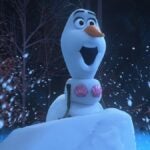 There’s something about the simplicity and effectiveness of the stories that Olaf chooses to reenact that speak to their innate power. Many of them, of course, are based on ageless fables or Shakespearean tragedies, but they have been adapted and modernized in ways that still retain the essence of what made them so impactful in the first place. And it’s this Disney version that modern audiences love so dearly. It also speaks to the difference between Disney animated features and other studios’ work – can you imagine boiling the essence of, say, one of the “Madagascar” movies into an easily digestible two-minute chunk? (Fair warning, you’ll want to watch all five of these Disney movies again after seeing the Olaf-ized versions.)

“Olaf Presents” also represents to how far the studio has come in recent years. When Michael Eisner and Frank Wells took over the company in 1984, they made what at the time felt like radical changes to what was then a family-owned company, like release the animated classics on home video instead of sticking to the once-every-seven-years theatrical reissue model. These weren’t characters as much as they were antiques, to be appreciated but rarely played with. Even as the video boom meant that the studio was producing cheap, direct-to-video sequels to some of its very best movies, there were still aspects of the films and its characters that were untouchable. “Olaf Presents” feels like a breakthrough in that it is clearly lampooning some aspects of cherished Disney classics, but in a way that is respectful and artistically ambitious. This isn’t some poorly animated knockoff, this is produced by Walt Disney Animation Studios, undoubtedly worked on by animators who contributed to the original films. It speaks to the legacy of Walt Disney Animation Studios and its willingness to change with the times and to update its stories for modern audiences.

Obviously, a huge part of the “Olaf Presents” storytelling is Olaf and Gad’s brilliant vocal performance. (Much of what he says was clearly improvised.) Olaf has been kicked around a lot in the past, for reasons that are no fault of his own. Disney decided to market the first “Frozen” around the snowman instead of emphasizing its themes of sisterhood or the fact that it was a full-blown musical. Not Olaf’s fault. And when the decision was made to have the theatrical presentation of “Coco” augmented by a 30-minute Olaf Christmas special, people groaned loudly. But, again, not Olaf’s fault. Olaf is, like the Genie before him and Sisu after him, the character who can introduce iconoclastic references and wacky humor into an otherwise classical tale, and in doing so can disrupt (in a good way) the fabric of the “Frozen” universe. Do you really think we would have had an 80s power ballad in the sequel if Olaf’s song in the first film hadn’t set the stage? It seems doubtful.

“Olaf Presents” is perfect if you just want another tiny bite of the “Frozen” universe, if you want to appreciate the dexterous performance of Gad as the character, and if you want to see an irreverent celebration of a handful of Disney classics, beautifully animated and laugh-out-loud funny. It’s time we give Olaf his due.