TheWrap magazine: ”You’re a character actor. It’s not about everything changing for you in one moment,“ Nelson says Lois Smith told him early in his career

A version of this story about Tim Blake Nelson first appeared in “Dark Horses We Love” section in the Race Begins issue of TheWrap’s awards magazine.

Ask Tim Blake Nelson about the Western genre, and you’ll quickly learn that the Oklahoma-born character actor has thought a lot about it – and not just because he’s been on screens this year in “Old Henry,” Potsy Ponciroli’s intimate Western gem that features a quietly wrenching performance by Nelson.

“I’m an American actor,” said Nelson, whose career includes a co-starring part in “O Brother, Where Art Thou?,” the title role in “The Ballad of Buster Scruggs” and the mysterious detective Looking Glass in “Watchmen.” “And I think that the Western has its own peculiar and wonderful place as an artistic form in America, because it combines our westward expansion, tied up with the gun, with the ideal of the Western hero, the rugged individualist. You get that all together in this genre in the world’s most prevalent and powerful art form. And as an American actor, to be able to take part in that is nothing short of a privilege.”

Nelson’s role in “Old Henry” is in many ways the polar opposite of the showy gunslinger he played in “Buster Scruggs.” Henry is a weary man who wants nothing to do with the kind of Wild West action that his teenage son yearns for; he wants to be a simple farmer, which means he wants to bury a violent past that his son knows nothing about. 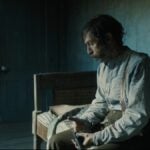 The character also lives in a remote cabin far from other people – which, to Nelson, gives the film particular resonance in this time. “Each generation gets to refract its own issues through the Western genre,” he said. “I think this one, even though it was conceived before COVID, has special relevance to COVID because it’s about a guy trying to live outside of society.

“And as a father of three boys, it interested me how the film explores the central tension of parenthood, which is: Do you isolate and protect your kids from the dangers and challenges of the mean old world so that they can have innocence for as long as possible, or do you expose your kids to what’s out there in service of preparing them to deal with it?”

While he was drawn to the script because of its focus on parenthood, he was worried when he read far enough to get to the delicious twist in the third act of “Old Henry.” We won’t reveal that twist here; suffice it to say that Henry, who acts as if he’s nothing but a modest farmer, has a celebrated history that he’s doing his best to hide from his son and, in a way, from himself.

“I found out, having completed the script, that there were going to be other responsibilities I would have in terms of inhabiting this historical figure,” he said. “And suddenly there was a sense of dread because I felt like those were responsibilities that I hadn’t bargained for as I was reading the script and getting very excited.

Because of COVID, Nelson had additional time to prepare for the role – time, he said, that he definitely needed. “At this point I don’t like taking roles unless I have at least several months to prepare,” he said. “In this case, because of COVID I had almost a year and I used every minute of that. It seems to me that when you play a historical figure inside of a genre, you’re responsible for a degree of verisimilitude. It has to be believable that you are the historical figure, but then it’s also a genre movie, so there’s a there’s an amplification, a heightened reality to which you’re also responsible.”

While the fancy gunplay he learned for “Buster Scruggs” gave Nelson a head start when it came to playing another gunslinger, the two characters were dramatically different. “In a lot of ways, I had to unlearn a lot of this stuff that I did on ‘Buster Scruggs’ and resist the temptation toward flash,” he said. “I had to use the gun more as a tool. I literally lived with the gun, and I probably loaded and unloaded it at least a thousand times in preparation for the role. It got to the point where my wife would say, ‘Stop loading the pistol while we’re talking, it’s driving me crazy!’”

But gunplay is only a small part of “Old Henry,” While Westerns are typically heavy on the action that plays out against wide-open spaces, Ponciroli’s film largely happens indoors, where Nelson’s eyes alone give us all the drama we need.

“I’ve called it a micro Western, which I think is an apt description,” he said. “I love oxymorons. You really shouldn’t be able to have a micro Western because the word Western connotes open spaces and scope. This movie does have some of that, and it also has archetypal figures and the heightened reality that you expect from the genre – but it’s also quite intimate, and that excited me.”

While Henry is one of the richest and biggest roles of Nelson’s career, and one of his most moving performances, he’s not under any illusions that this small drama, or any other movie, will make him a hot property in Hollywood.

“A long time ago, I played the (comic) role of Thersites in ‘Troilus and Cressida at Shakespeare in the Park,” he said. “And I allowed myself the delusion that everything was going to change as a result of having the role of the fool in a Shakespeare play in arguably the most important venue for performing Shakespeare in New York City. And the play ended, and my life didn’t change in the least. I was still going out auditioning for commercials and voiceovers and plays and, and mainly failing.

“And my friend Lois Smith, the actress, said, ‘You seem down, Tim. What’s going on?’ And I said, ‘You know, I just played Thersites in ‘Troilus and Cressida’ in Central Park, and I thought things were going to change for me.’ And she said, ‘Tim, you’re a character actor. It’s not about everything changing for you in one moment. You have to look at your professional life as an accumulation, not as any single moment where you’re going to break through.’

“And even though ‘O Brother, Where Art Thou’ to a degree did do that for me, I think Lois was ultimately right. And the more I think in those terms, the richer my life becomes.”