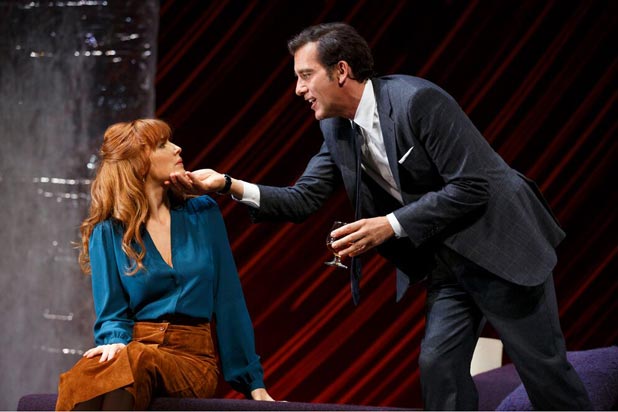 I haven’t had this much fun in the theater since Ivo van Hove set “A Streetcar Named Desire” (1999) in a bathtub at the New York Theatre Workshop.

Having fun isn’t what you typically expect from watching a Harold Pinter play, much less one of his more indecipherable works.

What’s the opposite of deconstruction in the theater? I’m not sure. But that’s what director Douglas Hodge does with “Old Times” in this Roundabout production, which opened Tuesday at the American Airlines Theatre.

Deconstruction usually involves having the actors bring the subtext to the foreground, which is what van Hove did with his amazing “Streetcar.” In Hodge’s “Old Times,” the actors aren’t playing the subtext necessarily. They share a feverish imagination that doesn’t have much to do with the text, but nonetheless illuminates it in quirky ways.

And what could be more apt than a quirky “Old Times,” a play about a married couple (Clive Owen and Kelly Reilly) and an old acquaintance (Eve Best) who may be dead, a memory, or simply the wife’s former roommate. Pinter’s play defies interpretation. Hodge and company emphasize that defiance.

They also mine the play’s humor, as well as the sexual antagonism that exists between Pinter’s people.

Owen, in his Broadway debut, gives us a Deeley who’s not only soused from the get-go but fey in an attractively disheveled sort of way. That approach to the husband throws the homoeroticism of Kate and Anna’s past relationship into high relief.

As outfitted by designer Constance Hoffman, Reilly and Best look as though they walked out of an episode of “The Real Housewives of Orange County,” and in no way recall Pinter’s setting of a cottage in seaside England. To add to the intrigue, it’s hard to tell if the two women are trying to seduce each other or Deeley, who’s both sodden and light in his rumpled Armani. Whatever her sexual designs, it helps that Reilly has more red hair than Rita Hayworth in “Gilda.” (Okay, that 1946 movie is in black-and-white.)

Also Read: 'Whorl Inside a Loop' Theater Review: Why White Crime Is Different From Black Crime

For theatergoers who are tired of sitting through all those Pinter pauses, Hodge pushes his actors to speak rapid fire, often on top of each other; and when they do take a breath, it’s much more than a pause. It’s often a long, silent interlude in which they lounge around, smoke cigarettes, or strut as if readying themselves for the next barrage of words.

The effect is to push certain moments into the past-present, while other scenes clearly show the characters giving voice to their memories, which may not be accurate but are the real thing, or so Eve tell us.

Pinter purists will hate this production. In addition to the eccentric performances, Christine Jones’s set design puts quotes around its oddness: Kate’s bathroom takes the shape of a huge block of ice that recalls Stanley Kubrick‘s monolith from “2001: A Space Odyssey,” and the op-art cyclorama owes much to the title sequence of “The Twilight Zone.”