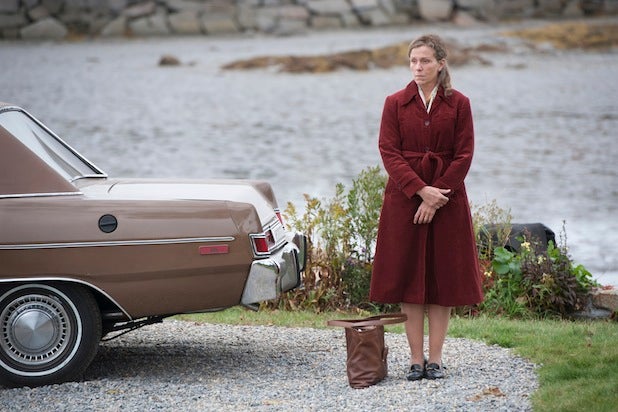 “Olive Kitteridge” is as flinty, and gloriously thorny, as the title character: HBO’s miniseries adaptation starring Frances McDormand  doesn’t coddle the audience any more than Olive would, unfolding at its own pace, character flaws resolutely on display.

It starts, forebodingly enough, with a suicidal episode before flashing back 25 years.

Olive, improbably nicknamed “Ollie,” as in rhymes with jolly, is a depressive teacher in coastal Maine with a caustic way about her. Prone to truth telling and cutting candor, she’s “not exactly warm,” as one character commiserates to her daughter-in-law mid-way through the decades-spanning adaptation, airing in two installments on subsequent nights.

But Olive, played by with refreshing vigor by McDormand, does care for her students and fellow townsfolk, even if it isn’t always easy to tell. She just doesn’t suffer fools gladly — and she has a very strict code about proper behavior, as demonstrated frequently in the time-shifting episodes.

McDormand executive produced the adaptation of Elizabeth Stout’s Pulitzer Prize novel, and it’s impossible to think of Jane Anderson’s teleplay with anyone else as Olive, an aggressively plain woman who is a beast to her happy pharmacist husband while also watching out for people in turmoil. It’s a testimony to the Oscar winning actor’s skill that HBO’s latest feel-bad entry is as compelling as it is.

McDormand doesn’t soften Olive’s edges to make her more likable, or any less difficult, but she does make her brisk caring and sly humor known as well. “Put it out of your mind,” she tells one person after a traumatic incident, advancing her own belief in industry as a cure all.

Olive is the kind of stern taskmaster that won’t let students in detention out early, even if they do have a dental appointment, and holds her family to very high standards even as she spends time with fellow married teacher Jim O’Casey (Peter Mullan). She frankly acknowledges her depression, and father’s suicide, even as she goes about tending to her garden and critiquing transgressors.

Just as her husband Henry (Richard Jenkins) can’t help his solicitous manner, she can’t help dishing out the zingers. She’ll criticize herself, but stiffens when others do the same.

Henry is more outwardly solicitous, but Olive tends to people in her own way, cajoling a depressed mother (Rosemarie DeWitt) out of bed, and making another throw out a rifle before he can hurt himself.

At her worst, Olive lets her sharp tongue get the best of her, rebuking her son Christopher for a junior high paper she termed “lazy, slapdash crap” and needling Henry about the enthusiastic young employee (Zoe Kazan’s Denise) that he not so secretly adores.

Unsentimental in the extreme, she resents Henry for not being smart enough, and midway through the miniseries, the two get into a nasty fight rivaling George and Martha in “Who’s Afraid of Virginia Woolf?” for marital viciousness.

Yet she can, and does, try to bite her tongue on occasion, as when she visits her grown son, played by “The Newsroom” co-star John Gallagher Jr., in Brooklyn and suffers he and his wife’s judgmental comments about her parenting style. It is only toward the end, as she commiserates with Bill Murray‘s Jack, a wealthy widower, that she reveals some of her regrets about her behavior. Their banter is bittersweet, suggesting what Olive’s life might have been like with a more mentally agile partner.

“Olive Kitteridge” does not shy away from showing the mundane sides of domestic life, and the marital compromises that accumulate over time. It’s also unflinching about mental illness: The teleplay suggests that several of the emotionally troubled characters have hallucinations and therefore could be schizophrenic.

These scenes were jarring in one troubled character, but the line before reality and imagination became a little too blurry for Olive toward the end. Up until then it seemed like we could always count on her to give it to us straight.

It was one misstep in Lisa Cholodenko‘s direction. The production is exceedingly well put together and boasts a fine cast that also includes Ann Dowd (pivotal figure in HBO’s melancholy post-Rapture series “The Leftovers”) and “Breaking Bad” co-star Jesse Plemons.

McDormand is nothing less than extraordinary in the title role.

Over the course of the miniseries, there are a number of tragedies that befall townspeople, from a holdup to near drowning; this Maine community sure seems like a hardscrabble place to live. You may not want to run into Olive on the street, lest she launch a truth bomb in your direction, but you’d definitely want her in your corner when life gets too hard to take; she knows the struggle all too well.