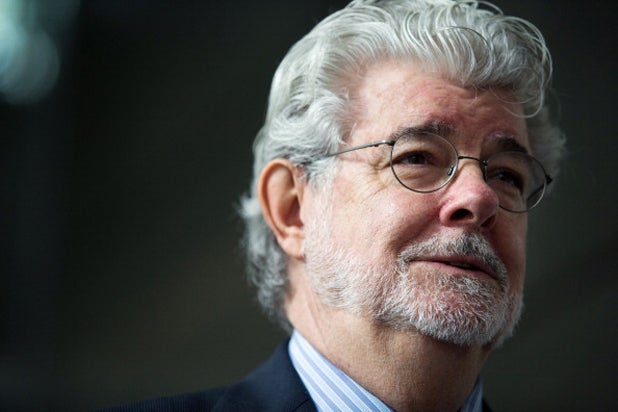 We are all bonded by the Force. It is a deep and powerful connection that unites us all and fills us with wonder, inspiration and imagination. It transports us to a galaxy far, far away littered with gaps to fill with new characters and worlds. It is a simulator where we test our ideals against our darkest impulses and see what scenarios play out.

The Force is a beautiful thing, and it is time to once again honor the man who created it. The same man who said the Force had something to do with amoebas. It’s time to praise the Great Beard, George Lucas.

This is not an easy thing for many followers of The Force to do. For the past 17 years, a growing throng has heaped scorn upon the man who created the very thing they hold undying passion for. The grievances are all well known. Prequels. Midichlorians. Special Editions. Whiny Anakin. “NOOOOOOOOOOO!!!!!”

The Great Beard’s fall from grace was like an avalanche on the mountains of Hoth. It began as shock and denial with “The Phantom Menace.” It became growls of anger with “Attack of the Clones.” After “Revenge of the Sith,” his doom was sealed. George Lucas‘ name would be met with snark rather than reverence in sci-fi circles. YouTubers have made a cottage industry out of comprehensively dissecting each prequel film and fixing them with fan edits.

A sea of ink has been spilled discussing all the people who kept the Original Trilogy from being bad. Marcia Lucas, Lawrence Kasdan and Irvin Kershner are among the people credited with correcting Lucas’ excesses. It seems that the new core tenet held by some of the most ardent followers of the Force is that “Star Wars” is great in spite of George Lucas, not because of him.

On this May the 4th, the first since “Star Wars: The Force Awakens” launched a new era for the series, it is time that we disabuse ourselves of this notion. As disappointing as the prequels were, let’s recognize that the majesty of “Star Wars” is inextricably tied to the passion and vision which that Methodist film school geek from USC pulled out of his head and put on the screen back in the 1970s.

It has been said that Lucas is a great idea guy who struggles to execute his concepts on a script. It’s a fair criticism, but the secret of “Star Wars” success lies within it. For a brief, glorious moment in time, he was of the best idea guys ever. Fans everywhere have stories about how “Star Wars” first dazzled them as kids, anrough many of these stories is the pure spectacle of the films. The sight and sound of a lightsaber igniting is unlike anything else ever created. Ditto for Darth Vader entering a hallway as his respirator ominously echoes.

It’s the world-building built on those sights and sounds that turned it into the biggest franchise of all-time. Every “Star Wars” fan has imagined what kind of person they would be in Lucas’ world. Many imagine themselves as Jedi, but others see themselves as Corellian pilots, bounty hunters, Stormtroopers, or Sith Lords. Lucas built these characters and the different paths of life they walk down. He found a way to create a mythos within which billions of moviegoers worldwide have found some element that personally resonates with them. Rewrites from better screenwriters can’t form that alone. Only a unique vision that those rewrites service can deliver such impact, and Lucas found it.

Other worlds like Hogwarts have come close, but “Star Wars” remains the most immersive and captivating storytelling playground in all of modern fiction. It took the swashbuckling adventure of ’50s pulp novels Lucas loved as a kid and translated it into a big budget movie with a scale and universality that no one had ever seen before. Harlan Ellison once said that there are five works of fiction that every person knows about: Mickey Mouse, Sherlock Holmes, Tarzan, Robin Hood and Superman. If “Star Wars” hasn’t joined that list yet, it is rapidly approaching it.

Also Read: 11 Of The Best 'Star Wars' Fan Films Ever Made (Videos)

“The Force Awakens” is proof of this. The controversy surrounding the prequels hasn’t diminished the franchise’s popularity, and now an entire new generation of kids are falling in love with Finn, Rey, and BB-8 the way their parents fell in love with Luke, Han and R2-D2. But some fans believe that the new “Star Wars” hasn’t done enough to separate itself from the old. “The Force Awakens,” it is argued, takes enormous chunks of its narrative and cinematic style from “A New Hope.” Kathleen Kennedy even noted in a promotional documentary that they were reluctant to do anything too ambitious with “The Force Awakens” because they “needed to understand the rules” of the mythos … rules that George Lucas created.

J.J. Abrams didn’t save “Star Wars” from George Lucas. He was trying to learn from the model Lucas left behind. Even after he sold his brainchild and walked off into the setting twin suns of Tatooine, his influence still hangs over Disney’s newest chapter. Rian Johnson and others will hopefully take “Star Wars” into new horizons with stories that Lucas could never imagine, but that shadow will always be there to some degree. “Star Wars” is as personal as creative works get, and that personal vision will be embedded in anything that future filmmakers do with it.

It hurts to have Vader’s origin story be so disappointing. It’s frustrating that George Lucas has taken the temptation every creative person must resist to endlessly tweak one’s work to the worst extreme with the special editions. But he is also a testament to how the best artists can make billions see the world the way they do with one unique creative work. No cinematic classic can be made without the input of many people through the process. But it often begins with a single person and a single idea, and George Lucas and Luke Skywalker remain the greatest person/idea combo of all-time.