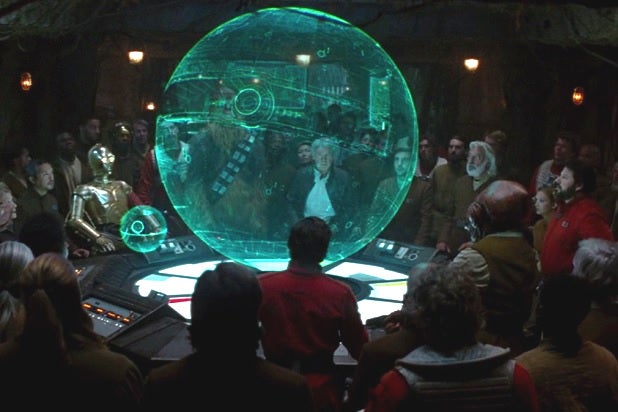 The odds were against “The Force Awakens” from the start. When Disney bought Lucasfilm near the end of 2013, they were intent on getting the first new film out in 2015. J.J. Abrams was hired to direct in 2013, with a planned release date for the first movie coming up in May 2015.

It was somewhat cynical to insist that a massive $200 million-plus production be pushed out that quickly, but it wasn’t anybody actively involved in making the movie who made that decision. And from there it was a cavalcade of chaos as Kennedy and Abrams scrambled to put a movie together from a half-written screenplay because they had no other choice. They were, at least, allowed to push the movie back to December of 2015, so there was that.

“The Force Awakens” changed a lot between when Michael Arndt first put pen to paper and when we saw the film. Many of those changes came during production and even, if the many rumors about what went on behind the scenes are to be believed, in post. It was a movie constantly in flux until they had to show it to us.

After I saw the thing in December, I wrote that “The Force Awakens” seemed to be trying to make you forget the putrid prequels by simply recalling what came before them.There are long stretches of its running time that seem to be there for no reason other than to echo scenes from the original trilogy. At the time, I thought it was a cynical corporate play on nostalgia. But maybe it was just nerves and fear.

On the Blu-ray and digital HD releases of “The Force Awakens,” there’s a 70-minute documentary about the making of the film. And right off the bat you hear a lot of comments like this one, from Lucasfilm boss Kathleen Kennedy:

“I don’t think we ever really felt like we were ready to go.”

The doc is buried in that sort of comment, particularly early on when everybody is coming to grips with the task they’ve been saddled with. Not just a new “Star Wars” movie, but a new beginning for “Star Wars.” “The Force Awakens” is the one to kick off a lifetime of new “Star Wars” stuff coming at us at an unprecedented pace. That’s a creative burden, yes. It’s also a lot of pressure.

“On the one hand you had this sort of out-of-body, oh my God, I’m in this place with this crew,” director J.J. Abrams said of the first cast read-through of the script he and Lawrence Kasdan had written. “On the other hand, you had the most primal terror of, oh my God, it was also the beginning of production.”

The rhetoric on the doc leans more often toward terror than excitement. “I think J.J.’s hesitation was everybody’s hesitation initially,” Kennedy said, “which was, ‘Wow, I wanna do it. I don’t think it’s something I can do. It’s too much responsibility.'”

It goes on and on like that. Co-writer Lawrence Kasdan compared it to setting out across the frontier at the front of a wagon train. Abrams called it “daunting.” Star Daisy Ridley, who plays Rey, said the first day on set was “quite a bit of pressure.”

It’s hard to figure out how sincere it all really is — “The Secrets of The Force Awakens” is a promotional documentary, so of course everything in it is calculated. But taking these comments at face value, I think, really illuminates how “The Force Awakens” turned out the way it did.

Specifically it helps explain why it so exactly recalls the original trilogy so often. What I didn’t get from watching this doc was a sense of ownership from Kennedy, Abrams & Co. over this world they were crafting. I didn’t feel any of the ambition that you need when you become caretaker of something like “Star Wars.” That lack is demonstrated most clearly in this line from Kennedy:

“The most important thing in the master/apprenticeship kind of role that we were all in — obviously George created Star Wars, but all of us had to become, in a sense, students of Star Wars. A real understanding of the history of Star Wars, that was really important. We needed to understand the rules, and once we understood that, then we could branch out.”

There’s not much in the way of branching out in “The Force Awakens.” Instead it seems preoccupied with trying as hard as it can to not branch out. Every time it feels like it could be going someplace new, it defaults to what the mathematical formula for what a “Star Wars” movie is says it should do.

But instead of pure cynicism, maybe that inability to turn “The Force Awakens” into something truly new was just an honest mistake caused by everyone involved feeling that pressure. Pressure from the overlords at Disney, pressure from the fans, pressure from simply trying to comprehend the cultural landmark that is “Star Wars.”

I do like this explanation better. I’d rather the frustrating haphazardness of “The Force Awakens” be an honest mistake. I just hope it’s not a mistake they’ll repeat.

The greatest works carrying the “Star Wars” label — whether they be films or come from the animated TV shows or the Expanded Universe of novels, comics, games and what-have-you — stand out because they defied the convention of the franchise in important ways. A great “Star Wars” story has to cast its own creative shadow.

“The Force Awakens,” however, lives inside a shadow already cast. For all our sakes, let’s hope that the rest of this new generation of “Star Wars” filmmakers, as Kennedy said, understand the rules and are ready to branch out. Judging from comments by Adam Driver, about working with Rian Johnson, who’ll be Episode VIII’s writer and director,  there may be some hope in that regard:

“I feel like there was so many moving pieces in the first one — just trying to solve it and set the vocabulary for what it was,” said Driver, one of the stars of the new trilogy. “There’s a lot of that anxiety is gone, because people have developed a language. I think it’s more of a testament to Rian coming into something very established and making it [his own].”

Maybe that is simply some promotional posturing. Even if it is, it’s definitely what I want to hear. Less anxiety, less fear, more making it their own.