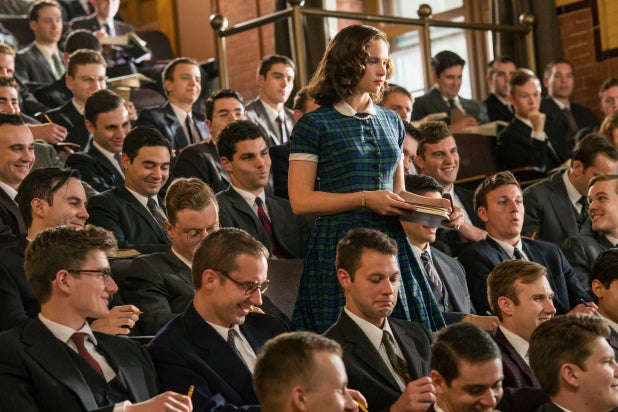 How do you make a biopic about one of the greatest living legal and political legends of our lifetime? For one, you don’t. It’s far too great a task to summarize in just two hours the work of Supreme Court Justice Ruth Bader Ginsburg and the impact she has had on an entire country and on generations of women.

Instead, director Mimi Leder’s “On the Basis of Sex” is an imperfect — at times too formulaic, but still engaging — love letter to women everywhere by giving them a peek at not the Ginsburg the Supreme Court justice, but Ruth the woman, the mother and the pioneer.

Ginsburg’s nephew, first-time screenwriter Daniel Stiepleman, uses his insider knowledge not only to feature Ruth’s journey to becoming the woman who pioneered gender equality within the law but also to take us inside the home life of Ruth (Felicity Jones) and Martin Ginsburg (Armie Hammer), where the two are equals in every way.

Also Read: Yes, 'On the Basis of Sex' Screenwriter Wrote Those Love Scenes About His Aunt Ruth Bader Ginsburg

The film spans a period of 15 years, beginning in 1956, when Ruth is one of the first women to attend Harvard Law School, where her husband Martin also studies. Ruth faces many challenges: Martin’s cancer diagnosis, raising two children, trying to make a career as a lawyer in a sexist culture which let her become an attorney but refused to let her practice it.

The story culminates in 1970, when Ruth finds the case of Charles Moritz (Christian Mulkey), who has been denied a caregiver tax deduction because of his gender. The country is in a period of cultural change, and Ruth hopes that by building a case around the gender discrimination of a man, she could end gender discrimination for women as well.

From Ruth’s journey as a Harvard Law student to the attorney who challenged sexist laws, “On the Basis of Sex” reflects on the struggles this ceiling-breaking woman faced in contrast to those her husband didn’t, but it doesn’t dare stomp on their love story as something that was just a sidebar to either achieving success. Neither does it try to win over audiences with the couple’s courtship. We meet both on an equal plane — new parents and law students, with individual goals and dreams, yet aspiring to success together.

Leder and Stiepleman show Ruth pursuing a career with the same passion she gave to being a wife and mother, which is refreshing to see. It’s rare that a film about a strong woman displays her home life in anything but disarray. Here, her career isn’t used as a subtle excuse for why she fails at being a caring or loving spouse or parent. In the Ginsburg home, no one is less than the other, and with the chemistry and likability of Jones and Hammer, it’s very easy to believe this was the case. Together they work as equals, supporting each other professionally as they do personally.

Ruth’s relationship with her daughter Jane (Cailee Spaeney, “Bad Times at the El Royale”) may be the most relatable, and the most believable. Mother-daughter relationships are complicated, and Ruth and Jane are no exception. Both are progressive, intelligent and unapologetic in their beliefs about equality, but they are from two different eras.

As many modern women know, the feminism of our mothers is not necessarily the feminism we ourselves believe in. It’s a subtle but interesting observation on the evolving views of feminism and gender equality, displayed beautifully between Jones and Spaeney.

The entire cast is exceptional, with appearances by Kathy Bates as spitfire Dorothy Kenyon; Sam Waterston as Erwin Griswold, the dean of Harvard Law and, later, solicitor general; and Stephen Root as a chauvinistic professor turned opposing counsel. But it’s Jones who really shines. She effortlessly embodies Ruth Bader Ginsburg with such aplomb that when she locks her steely eyes with the camera, you can feel it in your bones that this woman is about to change the world.

Hammer has already proven he can play a great slimeball (“The Social Network,” “Sorry to Bother You”), but here his charm and humility offers a road map on how to be an ally to women.

Though the film does play it safe, and slips into a formulaic narrative, the flaws are less within the film itself than in our expectations for what we want it to tell us. These are chaotic times, and Ruth Bader Ginsburg is our real-life Princess Leia. She inspires hope and strength and remains one of the few people who challenges the status quo, even today.

“On the Basis of Sex” makes her human. For some, that may not be enough, but it’s nonetheless a worthwhile and emotional experience meant to inspire generations to come.