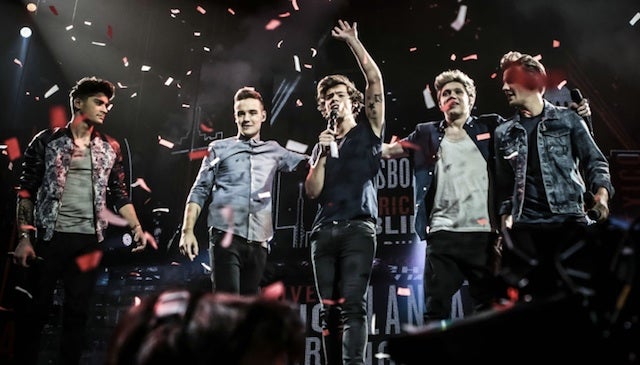 One Direction boldly goes where Justin Bieber and Katy Perry have only recently gone before them.

The boy band phenomenon is the latest musical act to headline a candy coated big screen documentary with the Friday release of "This is Us." Directed with a steady hand by "Super Size Me"s' Morgan Spurlock, the film is guaranteed to send tweens into hunk-fueled euphoria, overflowing as it does with ample underwear and shirtless shots of the English five-some.

TheWrap's Alonso Duralde acknowledged that the film is all artifice, designed to spruce up the boys' images, but said that it was an infomercial with a compelling sales pitch. Those looking for a pimples-and-all documentary in the vein of "Don't Look Back" need not apply though. "There are no fights, no diva fits, no groupies, no drugs, not even any bad language," Duralde wrote. "It’s as visually stimulating and kid-friendly as a Lisa Frank binder."

There may be a sex and drugs deficit, but the New York Daily News' Jim Farber argued that the film is unflinching when it comes to capturing the downside of life in the bubble.

"Lurking in Morgan Spurlock‘s otherwise boostery documentary is a sense of isolation and exhaustion surrounding its dewy subjects," Farber wrote.

Also read: 'One Direction: This Is Us' Review: An Infomercial as Amiable and Disposable as the Boy Band's Songs (Video)

Temper the expectations and brace yourself for preteen wails, advised the Arizona Republic's Bill Goodykoontz. Don't expect greatness, but fans will plenty pleased with the boyish antics of the young heartthrobs.

"'One Direction: This Is Us' is a glossy fan letter, with plenty of concert footage and cutesy interviews lovingly shot for maximum audience reaction," Goodykoontz wrote. "And judging from the screening, on that front it certainly delivers."

Cath Clarke of Time Out found the boys appealing — particularly in their desire to share their newfound wealth with their families.  However, she detected a few blemishes in their carefully manufactured facades, most of them having to do with their musical talent.

"The film is as harmless as the band," Clarke wrote. "Until you reach the music. One Direction are bearable with a cover song – Wheatus’s ‘Teenage Dirtbag'. But the sugary-sweet, she-doesn’t-love-me-back tracks really hurt."

Amy Nicholson of L.A. Weekly was less charmed by the enterprise, implying that Spurlock had sold out by making "This Is Us" nothing more than a over-stuffed commercial.

"There's the sporty one, the suave one, the dangerous maverick, and the two prepsters you won’t be able to tell apart until one of them gets fat or comes out of the closet," Nicholson wrote.  "Even calling the film a documentary feels deluded."

And don't buy Chris Nashawaty a One Direction t-shirt. The Entertainment Weekly critic said the film could have used a little backstage drama to go along with its portrait of superstars dazzled by their own good fortune.

"That's charming," Nashawaty wrote. "But it's also a little boring. What it's most definitely not is a documentary."