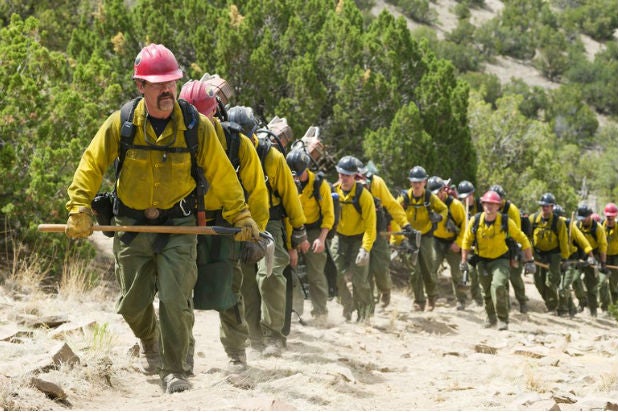 Twenty stand-up, small town guys. An elite squad of first responders in the Arizona mountains. Everyday heroes whose loved ones suffered the “greatest loss of firefighters since 9/11.”

Any studio head would likely break a finger motioning to greenlight that concept if it came through on spec, but that’s not how it was born. The story of Josh Brolin and Miles Teller’s “Only The Brave,” out Friday from Sony Pictures, happened in real life and was adapted from a widely-read 2013 GQ magazine story.

Sean Flynn’s “No Exit” was published in the pages of the Conde Nast title in 2013 and mounted as an ambitious web feature tracking the harrowing Yarnell Hill Fire — Arizona’s deadliest ever which overran 19 members of the aforementioned squad named the Granite Mountain Hotshots.

Directed by Joseph Kosinski (“Tron: Legacy”) and co-produced by the prolific Lorenzo di Bonaventura, the film also represents one the most ambitious efforts from Conde Nast Entertainment’s Dawn Ostroff, also a producer here and a veteran TV executive brought on by the high-brow publisher to adapt its journalism and brand power into filmed content.

“It’s hard to find original concepts,” Ostroff told TheWrap.”Drawing on these real life stories that are formulated and crafted so beautifully makes our job easier.”

GQ’s editor-in-chief Jim Nelson recalled commissioning the piece from Flynn, how it was a “really gripping, moving story that had such a tragic ending but you also felt these people, who live these daily heroic adventures by showing up for work, too often get forgotten by us.”

The group of Granite Mountain Hotshots on Yarnell Hill lost all of their 20 but one survivor in Brendan McDonough (Teller). Ostroff said one of the most rewarding points of adaptation was exploring “their lives and families, and reasons for going into this line of work.”

Considering the film is one of five wide releases this weekend, it was hard to avoid discussing the general queasiness floating around Hollywood thanks to the Harvey Weinstein scandal and its ripple effect . Ostroff thinks “Only the Brave” is a worthy change of subject.

“You’re dealing with the horrors that are going on in the world, people who do things that they aren’t proud of, and here we have a film about celebrating men for the right reasons,” she said.

CNE currently has a TV series up at Netflix based on a GQ property, “Last Chance U,” and is at work developing another feature film based on a Flynn article from the magazine.

“The Longest Night,” a true story of a ship that went down in the frigid Bering Sea leaving 47 survivors floating in the dark, has Frank Marshall attached to direct.

“We have to be careful, but there are projects we choose that we think have that promise. Working at Conde Nast, you can let someone go out and chase that great story. I will let a writer chase, hunt and fish a story for months, even years sometimes,” Nelson said.

Movies mining magazines for narrative represents a long marriage between New York’s legacy publishing circles and show business — and we couldn’t help pointing out to Nelson that quite a few of his fellow editors were leaving their posts.

“I would say that our job is always the same — I think most people don’t know or care about that,” Nelson said of high-profile exits from Vanity Fair’s Graydon Carter, Glamour’s Cindi Leive and longtime Elle guardian Robbie Myers.

“You’re always managing change. It’s been that way for me since I got here. There are rough weeks and great weeks.  The only thing you can do is entertain, inform, educate, make people feel like they’re getting their money’s worth,” Nelson concluded.

“You have to keep that in mind. When I go through a tough patch, I remember, ‘We get to tell stories,'” he said.

“Only the Brave” is in theaters nationwide.