Thanks to the Roots star Questlove, who’s also the leader of Jimmy Fallon’s "Late Night" band, the world has now seen this sign posted today in the NBC Universal commissary at 30 Rockefeller Center: 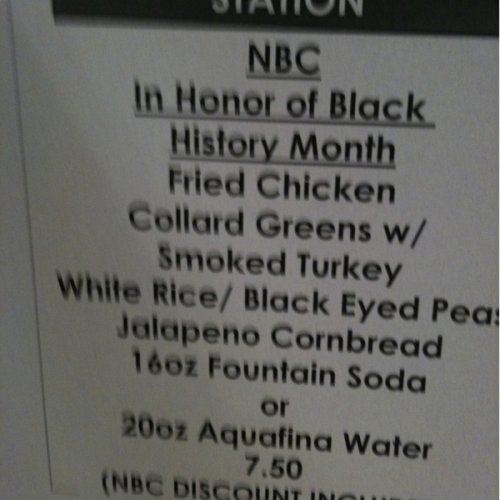 Questlove snapped a picture of the sign and posted it to his Twitter feed, along with the message, "Hmmm. HR?". Not long afterward, a rep for NBCU took to Twitter to respond.

"The sign in the NBCU cafeteria has been removed. We apologize for anyone who was offended by it," the rep said.

Before anyone goes and tries to make a mountain out of this molehill, it should probably be noted that, while Jeff Zucker can be quite hands-on, we’re pretty sure neither he (nor anyone even remotely close to NBC U’s exec ranks) had anything to do with this sign. (UPDATE 2:45 PM: Further digging reveals that the NBC cafeteria is neither owned nor operated by the Peacock.)

Besides, Zucker was in Washington today, testifying about the proposed merger with Comcast. (Great timing!)

In any event, this was probably just some well-meaning commissary staffer who decided to offer an unneeded explanation for what’s a pretty damn tasty-sounding menu. Or maybe MSNBC’s Chris Matthews is multitasking these days.

We have to agree with what one posted Tweeted in response to Questlove: "I’m simultaneously offended and hungry."