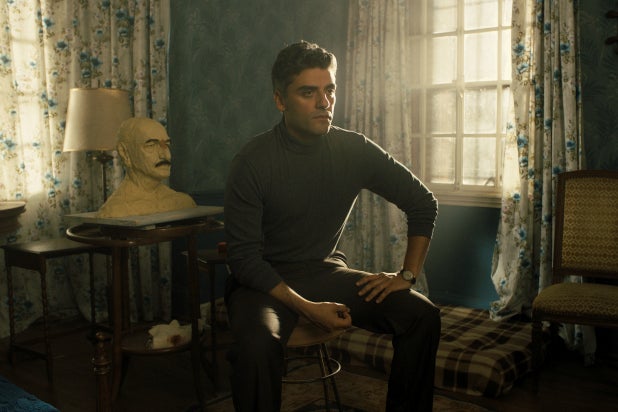 The innately intense Kingsley isn’t an ideal match for the mild-mannered murderer who inspired philosopher Hannah Arendt to coin the phrase “the banality of evil.” But like the rest of the cast, he holds our attention even when the movie buckles under the burden of earnest intentions.

Once you get past the jarring collection of mismatched accents, it’s a pleasure to be in the company of pros like Oscar Isaac, Mélanie Laurent (“Beginners”), Nick Kroll, and Michael Aronov (“The Americans”). But as Mossad agents, their characters find little pleasure in the task designed by their intimidating boss (Lior Raz) and approved by no less than Prime Minister David Ben-Gurion (Simon Russell Beale, “The Death of Stalin”): to secretly travel from Tel Aviv to Buenos Aires, risking their own lives in order to capture the elusive Eichmann.

The script’s blunt approach is indicated early on, when Argentine teen Sylvia (Haley Lu Richardson, “Support the Girls”) meets her new boyfriend at a showing of the 1959 racial drama “Imitation of Life.” Sure, it’s a nice way for director Chris Weitz (“A Better Life”) to give a shout-out to his mother, Susan Kohner, one of the film’s stars. But it’s an awfully obvious metaphor for the secretly-Jewish-passing-as-Catholic Sylvia, who proudly brings home the handsome, ultra-Aryan Klaus Eichmann (Joe Alwyn, “Billy Lynn’s Long Halftime Walk”).

Sylvia’s father (Peter Strauss) is stunned to realize he’s got a Nazi heir casually eating dinner at his house and immediately alerts Israeli authorities. While Klaus courts Sylvia by bringing her to terrifying Nazi rallies, the Mossad team begins devising a proposal to bring the elder Eichmann to justice.

The plan is a supremely dangerous one: Peter (Isaac), Rafi (Kroll), Isser (Raz), and Hanna (Laurent) are among the undercover agents who fly to Buenos Aires in hopes of airlifting Eichmann out. But first they have to kidnap him without the notice of his loyal wife (an underused Greta Scacchi) or Fascist henchman (a chilling Pêpê Rapazote, “Narcos”). Then they need to hold him at a hidden safe house that could be discovered at any moment by anti-Semitic local leaders. Worse still, the plane on which they hope to smuggle him out can’t take off unless Eichmann signs a document in which he freely agrees to be tried in Israel.

That unlikely requirement should be enough to create tension on its own, and Weitz does build a sense of palpable panic around these impossibly high stakes. Moreover, because the movie primarily takes place in 1960, everyone on the Israeli team has been directly impacted by the Holocaust. Eichmann was a chief organizer of the Final Solution, responsible for sending millions of Jews — including Peter’s sister and her children — to their deaths.

That being the case, it strains credulity when we’re asked to believe that a personally haunted, professionally brilliant spy like Peter could be so easily drawn in by his crafty prisoner. First-time screenwriter Matthew Orton often seems to be going more for broad-stroke dramatics than gripping authenticity, given that he’s crafted a fairly generic biopic out of what was truly one of the most remarkable missions in modern history.

But it’s evident that he and Weitz believe passionately in their project, as does this wide range of first-rate actors. Every one of the supporting players makes an impact in his or her brief scenes, with standouts including the luminous Laurent and an effectively subdued Kroll, although both could have used more to do.

Indeed, the movie really belongs to the central pair, to such a degree that it often feels like a two-hander. Kingsley and Isaac are unusually charismatic actors, which elevates each of their cat-and-mouse scenes. Though it’s off-putting to watch Kingsley humanize a man who dedicated himself to monstrous acts, it was Eichmann’s apparent ordinariness that became his second legacy: the banality that Arendt so famously described after watching him defend himself as a cog in larger machinery.

Both Weitz and Orton are keenly aware of the parallels between Eichmann’s era and our own, and though they don’t hit them too hard, their intent is powerfully clear. This urgency (aptly accentuated by Alexandre Desplat’s score), and the sincere commitment of all involved, gives the movie a greater weight than its labored pacing and bland visuals otherwise might.

It’s a shame the filmmakers felt constrained by the import of their subject matter, rather than inspired to take some artistic risks. But even when the storytelling falters, the story itself — not merely extraordinary, but eternally relevant — remains paramount.

Ryan Gosling, Russell Crowe and Edward Norton have all portrayed neo-Nazis or skinheads on film