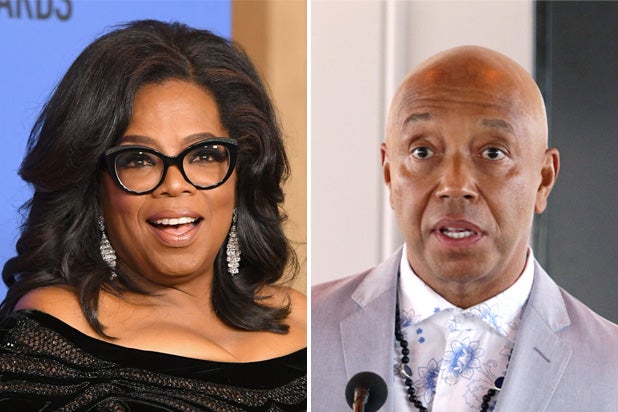 Oprah Winfrey says that Def Jam Records co-founder Russell Simmons “pressured” her to drop her support for the documentary “On the Record” featuring accounts from women who have accused the music mogul of rape.

Winfrey dropped her support of the film and from Apple TV+ last week, but Friday she clarified in her first comments since dropping the film to The New York Times that Simmons’ pressure was not the reason she stepped away from executive producing the project.

“He did reach out multiple times and attempted to pressure me,” Winfrey told the Times, saying that Simmons believed that accuser Drew Dixon was lying. Winfrey added that other people also contacted her to question Dixon’s credibility.

Also Read: Russell Simmons Accuser on How #MeToo Has Rocked the Music Industry: 'There May Be No Bottom' (Video)

“I told him directly in a phone call that I will not be pressured either into, or out of, backing this film,” Winfrey said. “I am only going to do what I believe to be the right thing.”

“On the Record” is directed by Kirby Dick and Amy Ziering and is set to premiere at the Sundance Film Festival later this month, but without Winfrey’s involvement.

Winfrey said in a statement to TheWrap that she felt the film was not yet ready but that the filmmakers insisted on bringing the film to Sundance. She told the Times it was those reasons, not Simmons’ “pressure,” that caused her to pull her support. The documentary was meant to debut on Apple TV+ later this year.

“I have decided that I will no longer be executive producer on ‘The Untitled Kirby Dick and Amy Ziering Documentary’ and it will not air on Apple TV+,” Winfrey said in a statement. “First and foremost, I want it to be known that I unequivocally believe and support the women. Their stories deserve to be told and heard. In my opinion, there is more work to be done on the film to illuminate the full scope of what the victims endured and it has become clear that the filmmakers and I are not aligned in that creative vision.”

Winfrey continued: “Kirby Dick and Amy Ziering are talented filmmakers. I have great respect for their mission but given the filmmakers’ desire to premiere the film at the Sundance Film Festival before I believe it is complete, I feel it’s best to step aside. I will be working with Time’s Up to support the victims and those impacted by abuse and sexual harassment.”

A story in THR on Friday revealed that Ziering and Dick, the directors of “The Hunting Ground” and “The Invisible War,” were blindsided by Winfrey’s departure from the project and learned of the news only 20 minutes before the news broke to the public. In a statement to TheWrap, the filmmakers said they were disappointed but would continue to support the voices of other black women in the #MeToo movement.

Also Read: Apple to Release 'The Banker' in March After Conclusion of Misconduct Review

“Revealing hard truths is never easy, and the women in our documentary are all showing extraordinary strength and courage by raising their voices to address sexual abuse in the music industry,” Dick and Ziering said in a statement. “While we are disappointed that Oprah Winfrey is no longer an executive producer on the project, we are gratified that Winfrey has unequivocally said she believes and supports the survivors in the film.”

“On the Record” tells the story of former music executive Drew Dixon during the height of the #MeToo movement as she grappled with the decision to come forward about her experience working under Simmons at Def Jam Recordings. Dixon says she was raped by Simmons in his apartment in 1995 and quit the company shortly after. Simmons has denied all accusations of non-consensual sex.