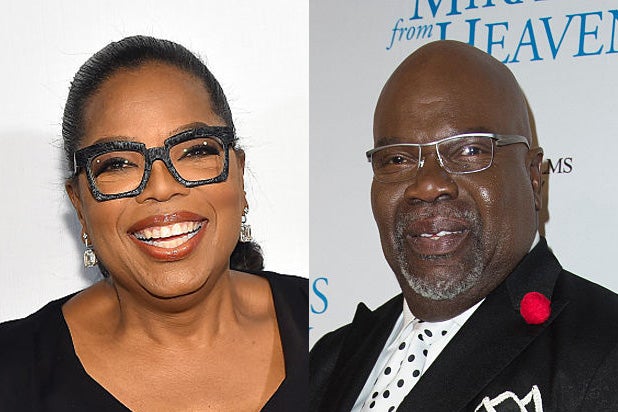 Oprah Winfrey called famed Christian leader Bishop T.D. Jakes to assure him that the villainous megachurch leader in her upcoming OWN drama series “Greenleaf” was in no way modeled on the Dallas-based preacher.

“The only resemblance is that our main character is named ‘Bishop’ and your name is ‘Bishop,'” Winfrey said Wednesday following a press screening of the show’s pilot at Soho House in West Hollywood.

Meanwhile, the real-life media-savvy Bishop Jakes is a best-selling author who runs a 30,000-member megachurch in Dallas and has a syndicated talk show due this fall.

“From my lips to your ears, ‘I, Oprah Winfrey, am not going to do anything that disrespects the church,'” Winfrey said that she told Jakes. “I am sitting where I am today because of the black church.”

Winfrey added that Jakes had a clean secular response to her heads-up call: “Send me a tape.”

The series, which debuts June 21 and has drawn comparisons to “Dynasty” and “Empire,” was created by Craig Wright (“Lost,” “Six Feet Under”).

“Greenleaf” will premiere Tuesday, June 21 at 10 p.m. on OWN before settling into a regular Wednesdays at 10 p.m. time slot

Watch some of the most A-list commencement addresses

"Ghostbusters" director Paul Feig gave a nugget of sage advice to the grads of USC's School of Cinematic Arts on May 13: Respect your actors, respect your colleagues, respect your audience, and above all... "Don't be an a--hole."
View In Gallery