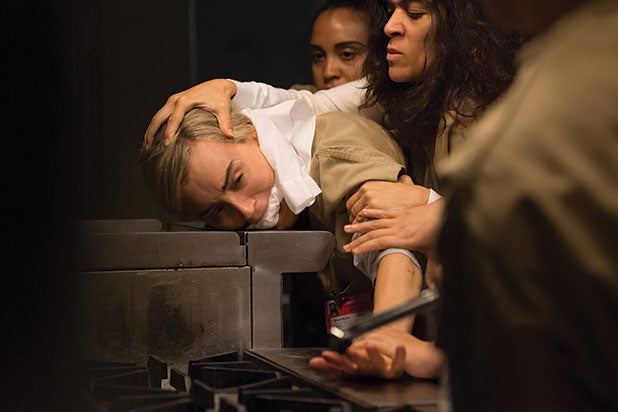 A year has come and gone for viewers of “Orange Is the New Black,” but no time has passed for the residents of everyone’s favorite upstate New York prison when Season 4 begins. The inmates are still frolicking happily at the lake; Alex (Laura Prepon) is still being menaced by a contract killer in the greenhouse; and buses of new inmates are still unloading at the front gate. But in the course of seconds, Litchfield transforms into a scary place, one that was only hinted at in the previous three seasons.

This newest season (arguably the series’ best since the first) is as much about danger as Season 3 was about faith. And those dangers, for the first time, come from all directions. There’s the danger of prisoner-on-prisoner violence, of course, but while in previous seasons there were authority figures in some capacity, that safety net has been swiftly and irrevocably removed by a new regime of guards whose true colors are slowly revealed throughout the season. And there remains the danger of self-destruction, one that most of the characters will grapple with over the course of this year’s 13 episodes.

Also Read: 'Orange Is the New Black' Star Kate Mulgrew Reveals She Was Kept in a Cage as a Baby (Video)

One of the smartest and ingenious aspects of the series has always been how willing creator Jenji Kohan and company have been to let Piper (Taylor Schilling), our ostensible audience surrogate, become increasingly unlikable and extraneous. But while the series has moved away from the notion that its sole slim, white, conventionally pretty character is its lead, Piper herself has not. She still walks around the hallways waylaying people to discuss her problems and brag about her new “gangsta” attitude. But everyone is looking through her; she barely registers unless one of her blunders has an immediate impact on their day-to-day lives. And Schilling, always too nervy and deadpan to be a typical leading lady, rises to the occasion by making Piper even more obtuse, until a moment of violence thrusts her out of her fantasy prison world and into harsh reality.

But that’s just a small piece of Season 4, which is so rich and dense with characters, backstories and subplots that some of its more interesting new additions remain mere teases. As always, the flashbacks remain the strongest aspects of the series, making the creation of a truly diverse — in terms of class, income, age and race — show appear so effortless that the lack of follow-up from other networks is even more astounding. The success of “Lost” propelled networks to throw millions of dollars at vaguely sci-fi, Big Idea series that ended up one and done; where are the “Orange Is the New Black” clones?

Not that we need a pale pretender to the throne. “Orange Is the New Black” remains one of the benchmarks when it comes to ensemble storytelling; even characters we thought we already know well turn out to have additional layers and stories to be told. And as always, members of the large cast complement one another beautifully. You’d be hard pressed to find a bad performance in any season, let alone any episode, and once again the actors rise to the occasion when given the material. This season, Taryn Manning, Diane Guerrero and Matt Peters all do finely tuned, memorable work as characters often treated as comic relief or a Greek chorus — but the powerhouse performances come courtesy of Lori Petty as Lolly and, in a more subtle way, Blair Brown as celebrity chef Judy King.

To explain why they are the season’s standouts would be a disservice to the beauties of binge-watching, but note that both underrated actors are so committed to the roles that they seem to have lived whole lives as Lolly and Judy. Both new additions perfectly capture what “Orange Is the New Black” has always excelled at: revealing the extraordinary that lies just beneath the surface.