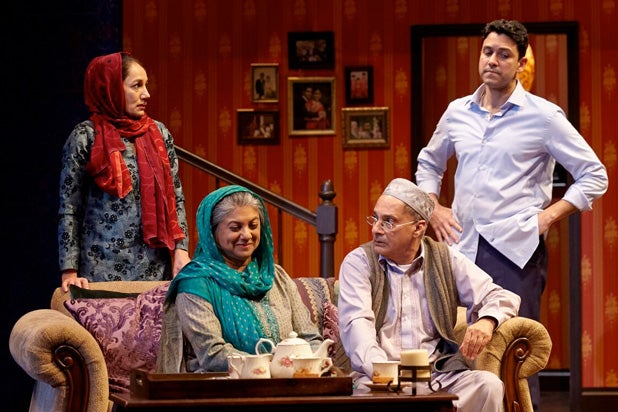 Hammaad Chaudry’s debut play, “An Ordinary Muslim,” is most effective when it recalls vintage material. The story of a man who lies to his family about a great job he doesn’t really have is nearly foolproof. It worked for F.W. Murnau with his silent-film classic “The Last Laugh” and it works for Chaudry in “An Ordinary Muslim,” which opened Monday at Off Broadway’s New York Theatre Workshop. The suspense, not to mention the sheer pathos, drives the play to its tragic, inevitable conclusion.

More intellectual but equally riveting is Chaudry’s examination of the second-generation curse. Unlike his Pakistani parents, Akeem Bhatti (Sanjit De Silva) didn’t come to the United Kingdom of his own free will. He was born there, and so lacks his parents’ sense of goal and dream fulfillment. And most important, he also lacks any sense of home, feeling very unwanted in West London and possessing no memory of Pakistan (or India before the Partition).

Chaudry’s portrait of Akeem vividly recalls some of the angry young men of 1950s British theater: He’s railing against everything and everyone, including himself. He can’t understand why his wife (Purva Bedi) wants to start wearing the hijab now that she’s about to be promoted to a managerial position at work. He can’t understand why his not ordering wine at a restaurant during an interview should cost him that job. He’s clearly not at home with his wife, parents (Ranjit Chowdhry and Rita Wolf) and older sister (Angel Desai). He literally throws an imam (Harsh Nayyar) and his son (Sathya Sridharan) out of his parents’ home. And he’s equally combative with a white Brit (David Adkins, being more than accommodating) who’s brimming with ideas on how to make it in the business world, every suggestion of which Akeem feels honor-bound not only to reject but verbally trounce.

Under Jo Bonney’s direction, De Silva finds precisely the right balance as his Akeem teeters between reasonable arguments and irrational behavior, and ultimately comes down hardest on his fellow Muslims. As he tells one of them, “You look like the Taliban. Your beards don’t have to be that long, mate….Wear a suit, look presentable — and then, then, you start praying in the street, in front of everyone….!”

If only Chaudry trusted his lead character’s journey a little more. “An Ordinary Muslim” is a full three-act play with enough characters on stage to give Akeem a large community in which to fight and flounder. The core tragedy holds our attention.

What comes off as forced and unrealized are all the little dramas surrounding Akeem that Chaudry has felt compelled to add: an extramarital flirtation, a grandparent’s favoritism for her male heir, a father’s spousal abuse. They seem stuck on, and some of the supporting performances that have to carry these stories suffer as a result.

Robert Hofler has worked as an editor at Life, Us Weekly and Variety. His books include "The Man Who Invented Rock Hudson," "Party Animals," and "Sexplosion: From Andy Warhol to A Clockwork Orange, How a Generation of Pop Rebels Broke All the Taboos." His latest book, "Money, Murder, and Dominick Dunne," is now in paperback.
KEEP READING..