The man who organized the petition behind the attempt to recall California Gov. Gavin Newsom is sick with COVID-19 after — you guessed it — having previously refused to get vaccinated.

Orrin Heatlie, a retired Yolo County sheriff’s sergeant, told The Sacramento Bee that his symptoms aren’t serious enough to require hospitalization or measures such as monoclonal antibody treatments. He also confirmed to the paper that he isn’t vaccinated.

Heatlie filed the petition to recall Gavin Newsom in early 2020, before the COVID-19 pandemic, at the time justifying it because he disagrees with Newsom’s policies regarding immigration and crime on grounds that critics have said are racist. For example, in a 2019 Facebook post, he wrote “Microchip all illegal immigrants. It works! Just ask Animal control!” He was later suspended from Facebook for this post. 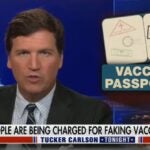 Also Read:
Tucker Carlson Says People Who Try to Limit the Spread of COVID-19 Should Be ‘Punished’ (Video)

But the petition was soon embraced by people who opposed even tepid measures to curb the spread of the deadly illness, which has killed more than 650,000 Americans.

Heatlie told the Bee on Tuesday, “I am not anti-vaccine. My daughter and my wife are both fully vaccinated, and I’m not against people getting vaccinated, but I am all for personal choice and people’s right to make an informed decision.” Of course, the number of people making the “personal choice” not to become vaccinated is the primary cause of the continuing death toll from COVID-19.

In addition to himself, Heatlie also infected his wife.

Heatlie is just one of dozens of prominent right wing personalities who have come down with COVID-19 after refusing to be vaccinated and in most cases after publicly expressing anti-vaccine sentiments.

If you’re curious, you can read more about the recall effort here.