An original draft of Disney’s live-action “Beauty and the Beast” included a window for a sequel to the worldwide billion-dollar box office hit.

The screenwriters and producer of the lush Bill Condon fairytale said an earlier script did not deal Luke Evans’ homme fatale Gaston the grim fate he got — but left the door open for another film.

“The idea was not that he died in the end, but the enchantress would come and he would be cursed as the new beast,” Evan Spiliotopoulos, who along with Stephen Chbosky wrote the script, said at a Q&A for TheWrap’s Awards Screening Series in Los Angeles on Thursday.

The enchantress would be the same one who turned Dan Stevens’ elitist, shallow prince into a cloven-hoofed monster for not giving her shelter in his humongous palace during a storm.

Spiliotopoulos said talks went very far for Evans’ character to “run off into the world as the new beast, whether to be redeemed or come back as a villain.”

The studio reversed course on the decision in the “eleventh hour,” Spiliotopoulos said, to stick with the more traditional story.

Here are two other “Beauty and the Beast” secret we learned: 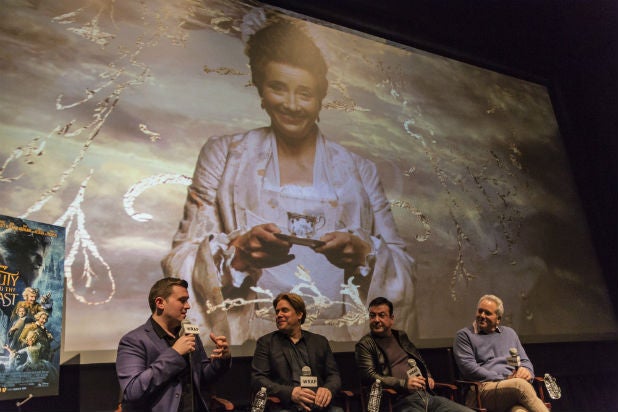 In the new version, Gaston Suffers From PTSD

Spiliotopoulos anchored his characters in a deep historical reality (the animated classic wasn’t that far off either, considering). “Beast” takes place at the turn of the 19th Century, Spiliotopoulos said, and Evans’ soldier Gaston has just returned from battle a different man than when he left.

“This is the end of the 100 years war, so Gaston was a soldier. Female illiteracy is at 80 percent, so Belle is teaching girls to read. Once you ground them and make them part of a historical context it grounds it in reality,” Spiliotopoulos said.

“For a Disney villain that’s pretty high brow,” chimed in Chbosky, who wrote a second draft.

Belle Entered the 21st Century Thanks to Daughter-Dad Movie Nights

Chbosky had been off the grid dealing with a family medical issue for eight months when the call came to write for the project.

“When I took on the project, my wife’s father had a stroke and went to New Jersey to get him on his feet. He’s great now, which is great, but I was off the gird for eight months not really working. In those eight months, I watched all these princess moves with my daughter,” he said.

“When I saw them through her eyes and her experience, it became very profound and personal to me.  I realized how powerful these role models were, how she wanted to be like Belle and dress like Ariel,” he continued.

Chbosky was most proud of evolving Belle’s instincts.

“I tried to give my daughter advice. If a beast kidnaps you, maybe don’t cry. Try to escape. Also something David and Bill Condon let me do, I so wanted her to escape by ripping up a dress [to use as a rope],” he said.

“Beauty and the Beast” is proving an awards player this year, with four Critic’s Choice Award nominations. Two original songs from the film, “Evermore” and Celine Dion’s “How Does a Moment Last Forever,” are also on the shortlist in the Best Original Song Oscar race.