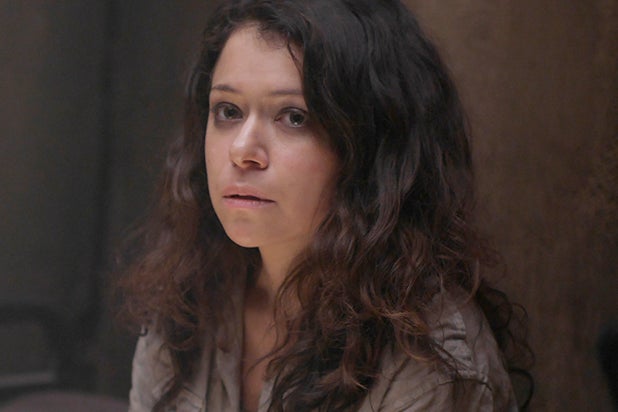 In terms of acting, Tatiana Maslany has been in a category all by herself for three seasons so far, playing not one, but sometimes half a dozen different characters on BBC America’s sci-fi hit “Orphan Black.”

The latest season alleviated a small bit of pressure from her shoulders, as Ari Millen joined the cast to play a different set of clones, but Maslany’s work has been as distinct and carefully choreographed as ever. She played a new clone — Krystal — and even voiced a scorpion.

To hear the actress tell it, the most challenging part of the job wasn’t having to play so many different personalities or even the long hours the job demands.

Below, Maslany relays the toughest thing she had to do this season, the most fun, what it was like to gain Millen, but lose longtime series regular co-star Dylan Bruce, and more.

And playing Krystal for the first time. She was such a fun character, and so not how I’d ever be cast in real life.

4. Who else on your show really deserves an Emmy, and why?
I think we have some of the most talented cast and crew on our show. They are amazing. And there are too many to name. I think Kathryn Alexandre, my clone double, deserves an award for her incredible, diligent, generous work. She does all the character work, physical, dialect, emotional and yet is never seen on screen. Jordan Gavaris, the physicality and elegance he brings to Felix is so far from himself, it’s astounding. Our amazing writers room deserves an Emmy. John [Fawcett] and Graeme [Manson], our creators. Stephen Lynch and Debra Hansen, who have created the looks for the characters. Our incredible special effects guys at Intelligent Creatures. The list is endless.

5. Are you a binge-watcher, or a once-a-weeker? What was the last show you binged and how many hours did you go?
The last show I binge watched was “Brooklyn 99.” I think the longest I went was maybe three hours. I’m not too intense.

6. What’s it been like this season having Ari Millen also playing clones?
Ari Millen has been amazing to watch and work with this season. He has done beautiful subtle work to differentiate the Castor clones. I love watching them deal with their glitch, with their systems breaking down. And their love of Coady, their mother, is so bizarre, twisted and kind of heartbreaking.

7. What has this season has done for the journey of the sisters?
The season has reunited the sisters in a very big way. The dinner party thrown in Alison’s honor is a nice reprieve for all of them from the madness of their lives. They’re all warriors in their own way, and as a team, they’re incredible strong.

8. Dylan Bruce, aka Paul, departed the show this season. What was that like?
That episode was so heartbreaking. Dylan was there from the beginning of the series, and he’s an absolutely wonderful person to work with. His work on this episode in particular really moved me. Dylan brought this beautiful openness and vulnerability that we hadn’t really seen from Paul yet. It was a compelling new layer.