Oscar ballots went in the mail on Monday. They should begin arriving in the homes of voters this week, and then back at PricewaterhouseCoopers almost immediately.

The accounting firm sent out more than 9,000 separate ballots, all of them color-coded by category so they can be more easily sorted when they’re returned to the company’s downtown office. All 5,777 voting members of the Academy will receive Best Picture ballots, while member of most branches will also receive separate ballots to vote in other categories.

Most of the ballots are accompanied by lists of all the eligible achievements in the category. 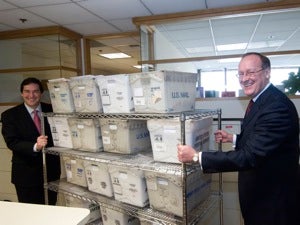 Many AMPAS members vote right away, according to PwC partner Rick Rosas (far left, with partner Brad Oltmanns in an AMPAS photo). Then the rate of return slows down for a couple of weeks, before picking up during the final days before the January 23 deadline.

For most voters, filling out the ballot will be a simple matter of listing the names of five films, in order of preference. In the Best Picsture category, of course, members will be asked to list 10 films.

For the acting awards, they’re instructed to name both the actor and the film — and they’re allowed to put the actor in whatever category the voter deems fit, without regard for studio suggestions or "for your consideration" ads.