When planning out the weekend rolling into Oscar Sunday, top talent had to make key choices when it came to which Academy Awards pre-event to go to first, how long to stay, what to wear (naturally), how many to hit in a single night and is the venue dog-friendly?

Here’s a look at some of the most coveted invites from the weekend. 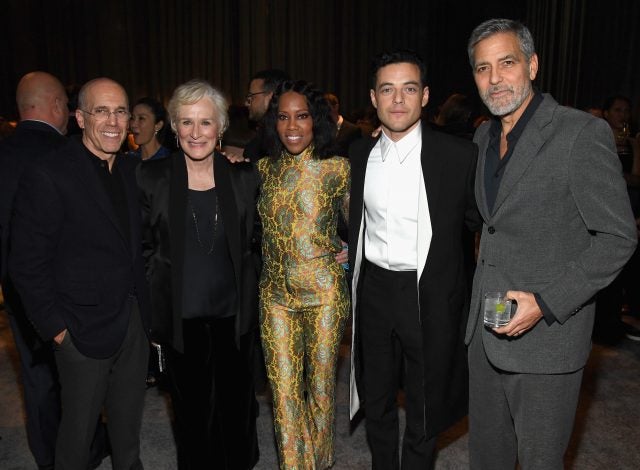 As every Hollywood player knows, you’re only as good as your last picture in this town; and you never know when your career might take a downturn. That’s why the Motion Picture and Television Relief Fund’s annual “Night Before” fundraiser is always the place to be on the Saturday evening before the Oscars, as it reveres and raises cash for the venerable service organization that supports members of the entertainment industry in time of need, be it for social services, retirement care or financial desperation.

It’s a behemoth, the one party that seems to get bigger every year; these days it has outgrown the town’s ballrooms and now happens at Fox Studios, where it raised $5 million for the fund by the end of this year’s 17th annual star-studded party. Look one way, there was MPTF Foundation chairman Jeffrey Katzenberg along with Glenn Close, Regina King, Rami Malek and George Clooney posing for a photo op (above).

Look another and earlier Oscar winners Leonardo DiCaprio, Viola Davis and Helen Mirren were in the crush, too, along with current nominees like Amy Adams, Spike Lee, Yalitza Aparicio, Adam Driver, Mahershala Ali and Viggo Mortensen.

And they kept on coming, more nominees in the stars-everywhere-you-turned crowd were Sam Elliott, Richard E. Grant and Willem Dafoe and past winners popped up, too, including Allison Janney and Octavia Spencer. Even Taylor Swift turned up: She stars in the Universal’s upcoming film version of “Cats.” 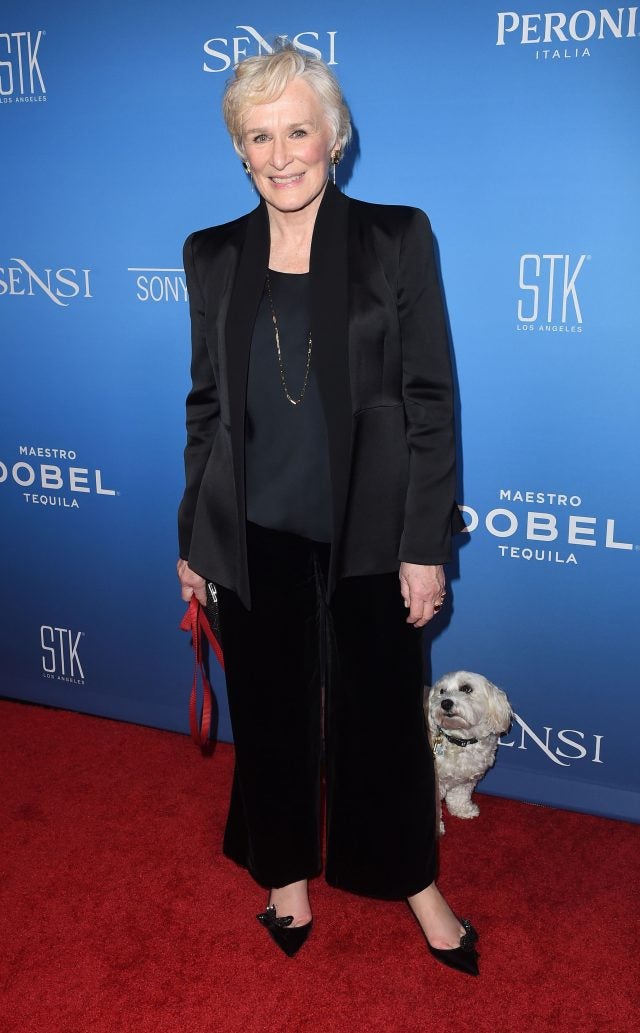 Saturday began with the Independent Spirit Awards and after party, where smaller indie films are celebrated. Glenn Close was triumphant as best actress for her work in “The Wife,” and that party gal kept right on going after a quick outfit change to the Sony Pictures Classics’ Pre-Oscar dinner at STK Los Angeles to celebrate the win.

She brought her daughter Annie Starke (who co-stars in the movie) and her little dog, too. Sir Pippin of Beanfield had quite the day on the red carpet (above) — and even went on stage during the Spirit Awards, too. 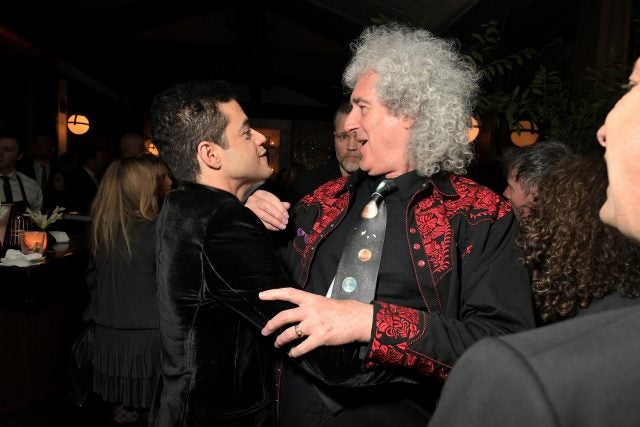 Rami Malek and Brian May are seen as Vanity Fair and Genesis celebrate the cast of “Bohemian Rhapsody” on Feb. 22 in L.A. (Photo by Charley Gallay/Getty Images for Vanity Fair)

Dinner at Cecconi’s on Friday night was all about “Bohemian Rhapsody,” as 20th Century Fox joined up with Vanity Fair and Genesis automobiles to toast that Freddie Mercury/Queen biopic with Belvedere Vodka and Hennessy XO (and to nibble those fabulous Cecconi truffle flatbreads, too).

Stars Rami Malek (above, with Queen guitarist Brian May), Lucy Boynton, Mike Myers, Ben Hardy and Allen Leech joined original Queen members May and Roger Taylor, along with singer Adam Lambert, who takes on Freddie’s vocals with the band these days. That power trio will perform at the Oscar show on Sunday. 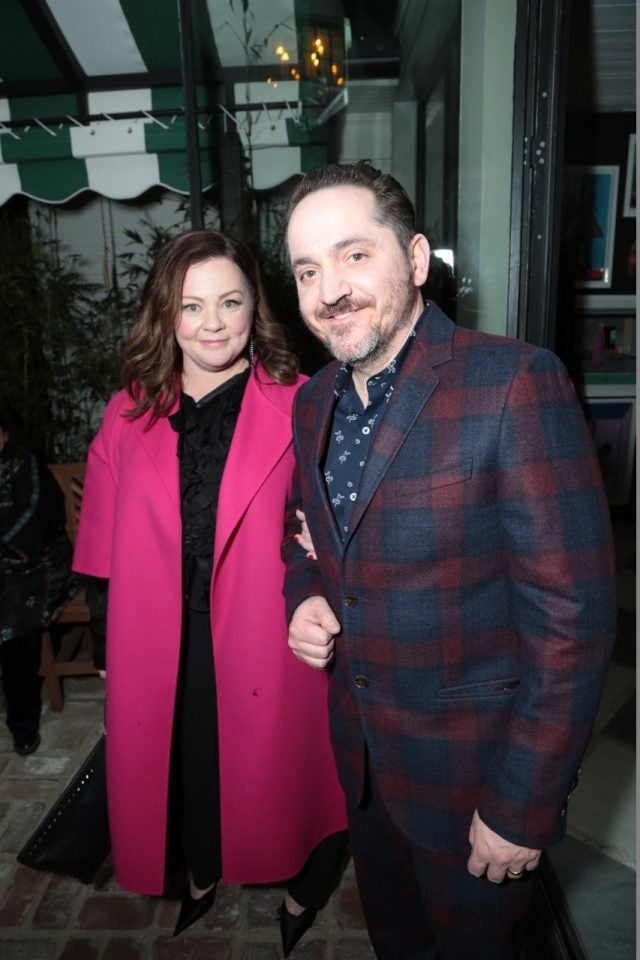 Friday night was awash with talent agency bashes, too, as CAA, UTA and WME all honored their nominees and clients. Naturally, the stars made sure to at least stop in for a photo op with their reps.

At the CAA Pre-Oscar Party sponsored by Heineken, best actress nominee Melissa McCarthy brought hubby Ben Falcone (above; both are in that agency’s stable) to check out the new San Vicente Bungalows in WeHo. Also along for the dance-filled bash were some of CAA’s biggest wattage stars, including more 2019 nominees (Bradley Cooper and Lady Gaga), as well as Jennifer Aniston, Jamie Foxx, Gerard Butler and Mick Jagger.

Over at the Sunset Tower, UTA pulled in their team of nominees, too — everyone from animation geniuses Brad Bird (“Incredibles 2”) and Phil Lord with Christopher Miller (“Spider-Man: Into the Spider-Verse”) to “Roma” breakout star Marina de Tavira. Ethan and Joel Cohn made the scene, too, along with Joel’s wife Frances McDormand, who took home last year’s best actress trophy. Kate Beckinsale, Tracee Ellis Ross, Elizabeth Banks and Nicholas Hoult stopped into this one as well, which went off to the dancing tunes spun by DJ Spider.

Meanwhile, WME’s Friday night celebration was at a private home, where client and best actor nominee Rami Malek was the center of attention. Other WME loyalists who stepped out to that party were Liam Hemsworth, Gal Gadot, Serena Williams, Rebel Wilson and Ginnifer Goodwin. 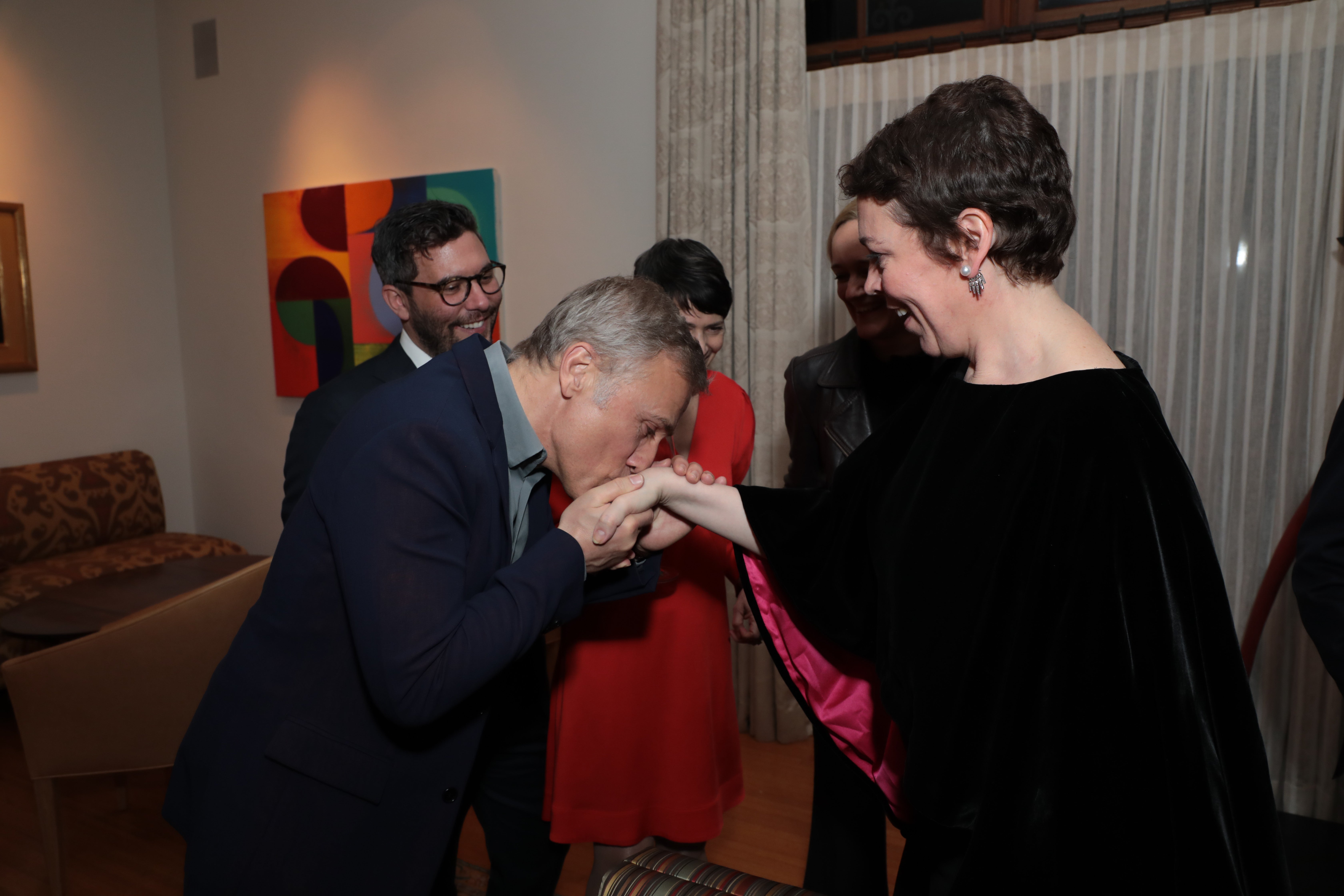 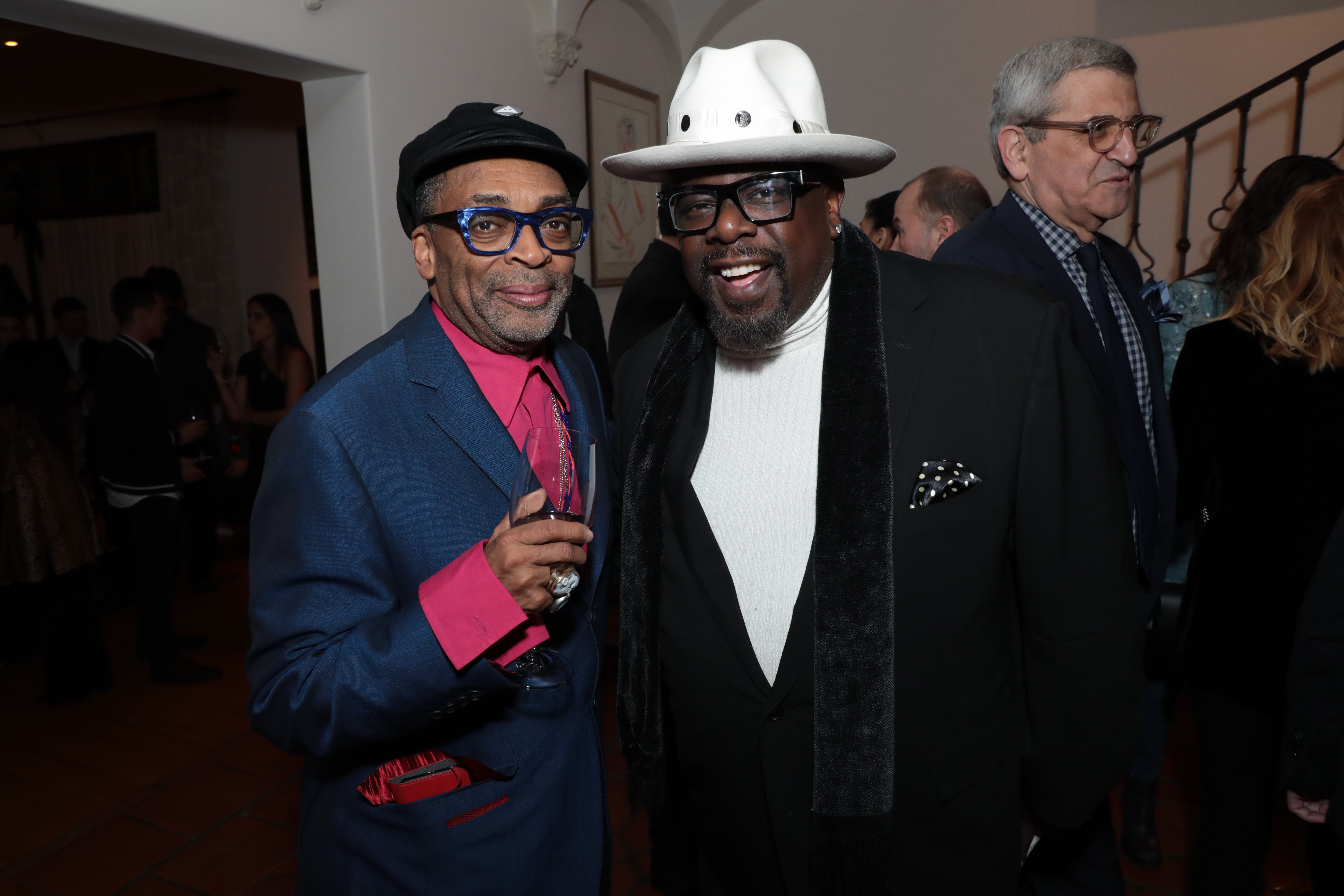 They enjoyed cocktails and canapés with former Oscar winners like Waltz and Kathy Bates. Former Academy Award nominees on the talent-filled scene were Michael Keaton, Samuel L. Jackson, Jacki Weaver and Jeff Goldblum. Spike Lee and Cedric the Entertainer shared a moment (above); we’re guessing Cedric still wants to know why he didn’t get a role in “BlacKkKlansman”! 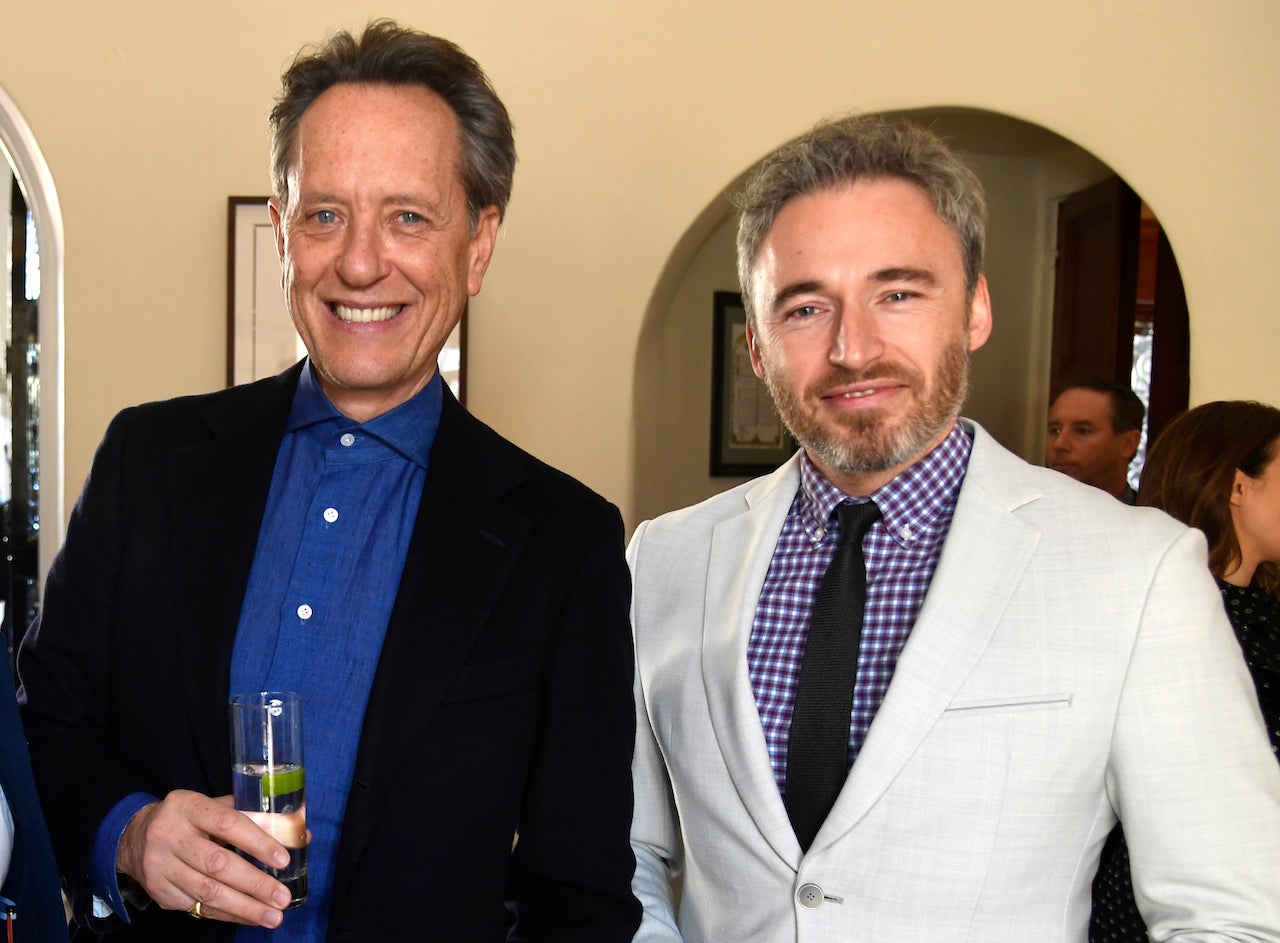 Friday night was also a night for Hollywood’s ex-pats to make merry, at least those from Canada, the United Kingdom and Germany, that is. Those proud countries hosted special pre-Oscar revelries to single out their citizens, beginning with the U.K. Film afternoon bash at the British Consul’s residence in Hancock Park.

There, with tea and scones (and some gin thrown in for good measure), best supporting actor nominee Richard E. Grant joined Michael Howells, the British Consul General in Los Angeles (in the photo above), for a champagne toast to all the nominees from across the pond. 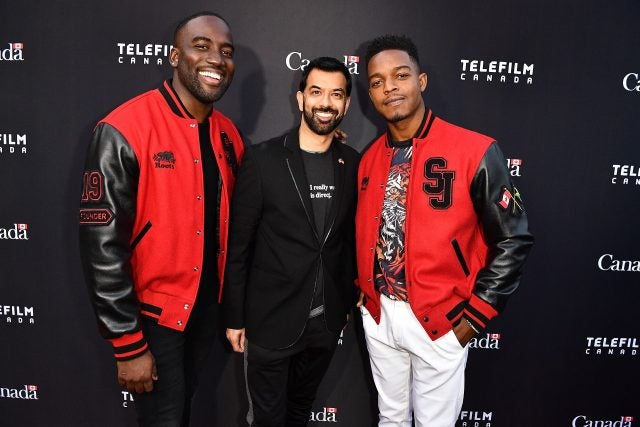 A few blocks away, at the residence of the Consul General of Canada, a big crowd celebrated everything short, since the Canadians own “five of the 10 short film nominations this year,” as Consul General Zaib Shaikh told the cheering Canucks gathered in his back yard.

He also shouted out to TeleFilm Canada and the National Film Board of Canada for their ongoing financial and creative support of Canadian filmmakers. Nominees on hand included Alison Snowden, David Fine, Domee Shi, Jeremy Comte, Marianne Farley, Marie-Helene Panisset and Trevor Jimenz. Some of Canada’s favorite Hollywood actors — Nia Vardalos, Maxim Roy and brothers Shamier Anderson and Stephan James (the star of the 2019 best picture nominee “If Beale Street Could Talk”) — joined in the late afternoon fete. Anderson and James flank Shaikh in the photo above. 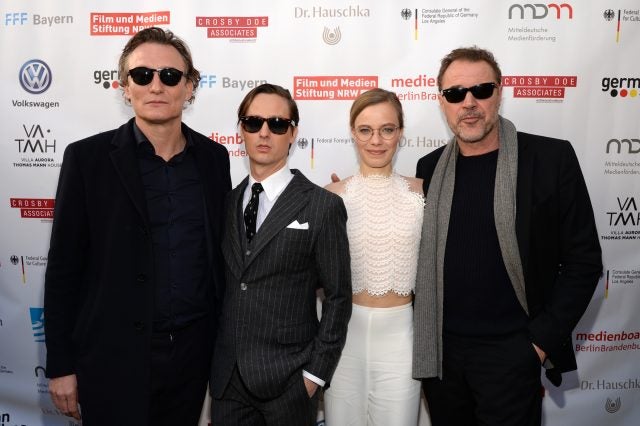 Over at The Villa Aurora in the Pacific Palisades, Germany also had their own Friday afternoon “die Feier” (celebration) to honor that country’s nominees, with accolades for Florian Henckel von Donnersmarck, director of the best foreign film “Never Look Away,” and his stars Oliver Masucci, Tom Schilling, Saskia Rosendahl and Sebastian Koch (pictured above). 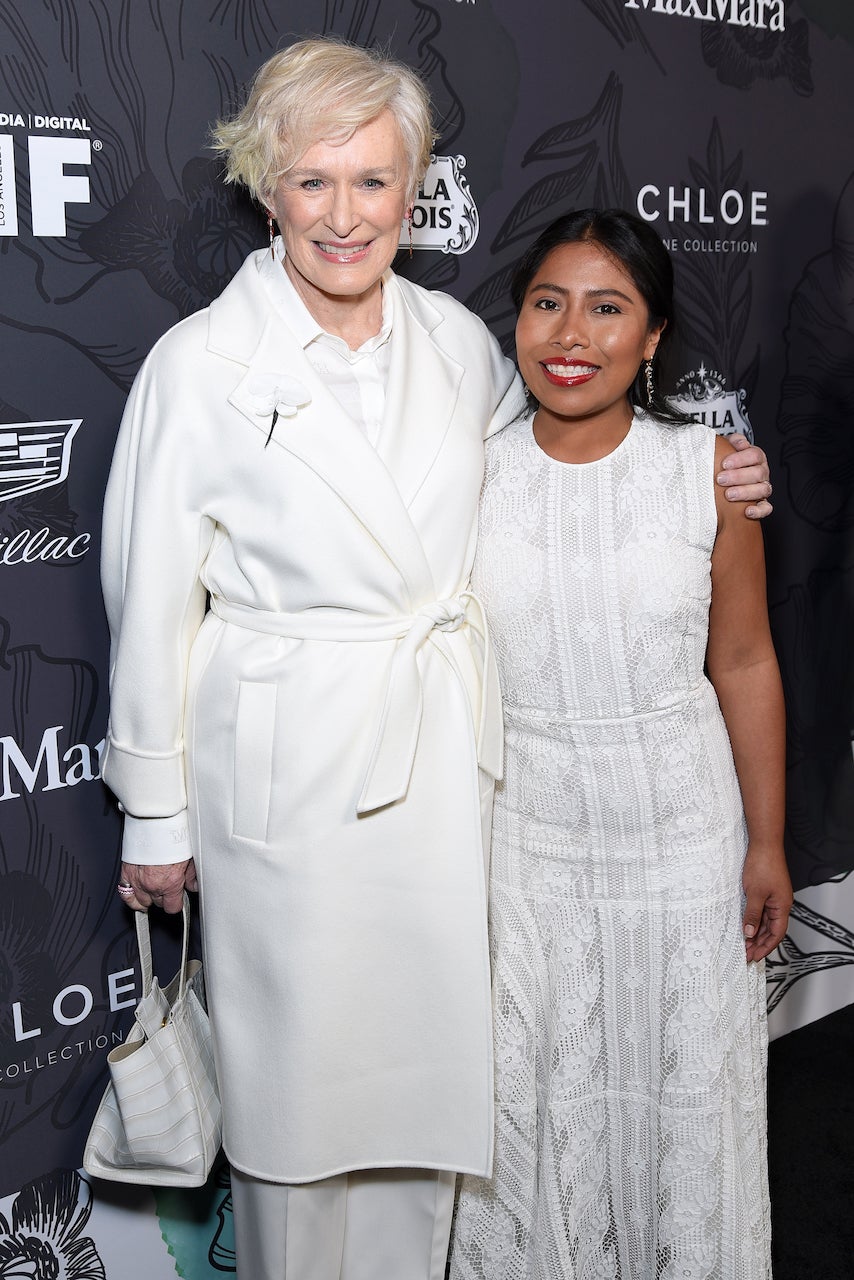 Taking over the newest party space in Beverly Hills, Women in Film made Friday night their own. At Spring Place (on Wilshire and Spaulding), traffic backed up and females poured out of chauffeur-driven rides to make their way up to the 12th annual WIF Oscar Nominees Party.

Everyone came to support the idea of empowering women in every aspect of film, from current nominees including Regina King, Sandy Powell and Marina de Tavira to Glenn Close and Yalitza Aparicio (above), who both dressed in suffragette white. 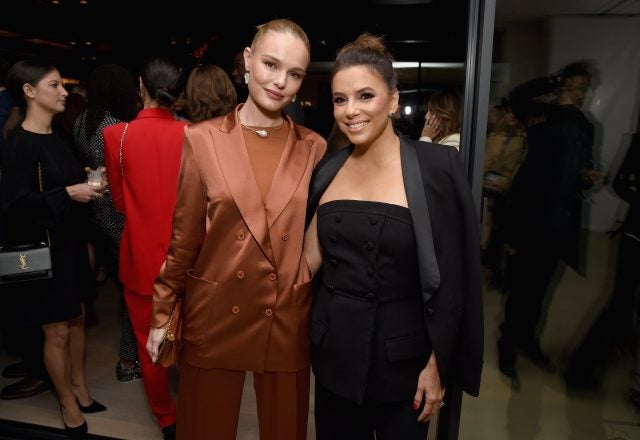 Actress and producer Kate Bosworth (seen above with Eva Longoria) led the rest of the talented crowd — Angela Bassett, KiKi Layne, Connie Britton, Lake Bell, Felicity Huffman and WIF head Cathy Schulman among lots of others — in launching a new initiative aimed at female directors. Chloe Wine Collection launched the “She Directed” contest in conjunction with WIF and Bosworth, with plans to provide four women both mentorship from established Hollywood veterans as well as funding for a future project.

“It’s a very important initiative,” Bosworth told The Wrap amid the din of the party. “It’s important to continually strive to put women at the center of the story. It’s frustrating that women still have to fight so hard to direct in this industry. It’s frustrating. It really is beyond frustrating. Women in general are some of the most ferocious energies on this planet and I think it’s about harnessing that ferocity. I get frustrated, I sometimes just want to upturn the entire table. But it’s about making enough noise that you get a seat at that table.” 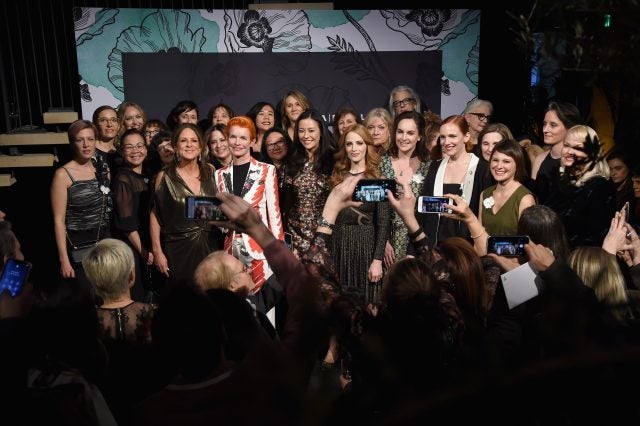 Women garnered 61 Oscar nominations this year, a record number, as Cathy Shulman told the appreciative crowd. “We are at the height of gender parity in Hollywood right now, since we started Women in Film 12 years ago. But gender parity is still the issue. Only 25 percent of this year’s Oscar nominees are women. We still need to keep fighting!”