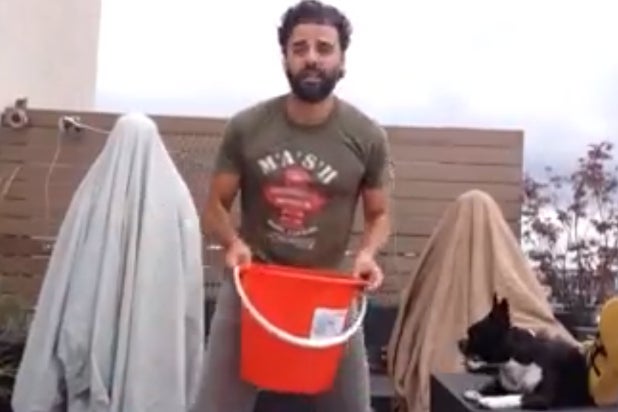 The latest ALS Ice Bucket Challenge comes directly from Tatooine or wherever the newest “Star Wars” film is taking place.

Oscar Isaac was challenged by Garrett Hedlund, and he fulfilled his obligation on Saturday.

Isaac, who may have taken the frigid, charitable plunge on the “Star Wars” set, claimed to have Harrison Ford and Adam Driver by his side. There were definitely two people in frame, but they were covered by blankets.

Isaac explained that the two actors were in costume and due to their signed non-disclosure agreements they could not be filmed.

The one identified as Ford has his left leg elevated and rested straight out. Ford broke his left leg in a June on-set accident.

Whether or not those were Isaac’s famous co-stars, there was definitely a french bulldog who clearly didn’t have to put his or her paw print on a similar NDA. The pooch didn’t love being around for the icy moment of truth, and took off quicker than the Millennium Falcon.