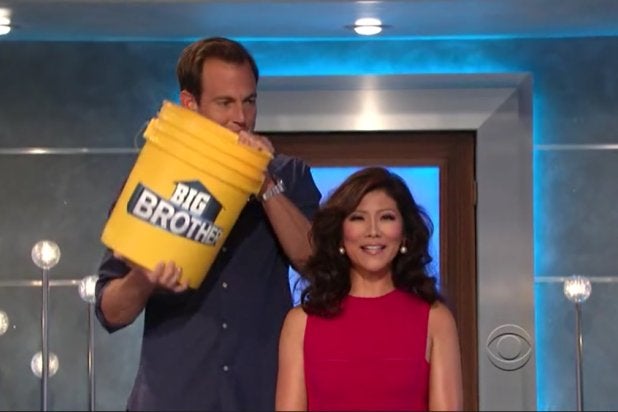 (Spoiler alert: Do not read on if you have not yet seen Thursday night’s live eviction episode of “Big Brother.”)

Julie Chen took the ALS Ice Bucket Challenge live amid a wild night of departures and returns on “Big Brother.” She was challenged by CBS head honcho and her husband Les Moonves to take the challenge live on “Big Brother,” and so she wrapped the night by getting all wet. “The Millers” star Will Arnett was there to give her an assist by dumping the water.

It was eviction night, and that meant tensions were at an all time high, and the Detonators were about to explode one of their own.

Zach’s wild antics put him on the block next to alliance member Cody, but it was the fact that his bromance/showmance Frankie put him up there that hurt the most. Cody has played a very quiet game throughout the summer, ruffling no feathers but not really making any big moves. Meanwhile, a “Zach Attack” means he’s about to run around running his mouth and potentially destroying anyone’s game.

Frankie was smart to take advantage of the contrived situation on Wednesday night’s show that turned the house against Zach to eliminate his one-time ally. And despite some last-minute scrambling by Zach, he pretty much knew there was little he could do.

In the end, it was another unanimous vote. Donny had promised Zach his vote, but Donny also knows his own back is against the wall. With no solid allies in the house, he’s playing a solo game, so throwing a futile vote against the tide will only draw unwanted attention. His only hope is to last long enough to watch the Detonators start to turn on one another, and then try to find a crack in the alliance.

He poked at Christine this week, reminding her that alliances are only good for so long. Eventually, one member becomes the first one out. And that person does not win the $500,000 prize. Christine knows she’s not among the top members of her alliance.

With the numbers dwindling, he may have started getting in her head. What will be really interesting to watch is how the returning player factors into the ongoing strategies, along with the end of the double Head of Household twist.

Jacosta, Hayden, Nicole and Zach all battled it out for a chance to return to the house. It was a close one, but Nicole squeaked her way back in, and there couldn’t be a better outcome for “BB” fans. Nicole was one of the few people smart enough and brave enough to target Frankie, and she’s definitely not looking to work with the Detonators.

Donny fans are probably pretty excited, too, because this gives him a potential ally. If they can convince Victoria to work with them, it’s still going to be an uphill battle. The remaining Detonators are five strong.

They might be able to convince Christine to flip, though she’s proven incredibly loyal-to-a-fault to the Detonators. But she does seem to be the bottom rung of that five-person alliance. If she flips, at worse she is in fourth position in a new alliance, which is still one better … and more than likely she’d be positioned at least above Victoria.

After all, the HOH can’t vote and neither can the two nominees. If there are four people on each side of the house, speculating a Christine flip, and a Detonator is HOH with another on the block, that would leave only two of them able to vote. The other three votes would belong to the non-Detonators and it’s bye-bye to the season’s dominant alliance.

This would, of course, require Christine to be brave enough to flip. And, if she’s smart, lie to the Detonators about it until vote night. If Nicole can convince Christine that the Detonators manipulated her and lied to her when she put Nicole on the block, then that trust would be broken and it could be anyone’s game again.

The “Big Brother” endgame is upon us, and it plays out Sundays and Wednesdays at 8/7c with live eviction episodes on Thursdays at 9/8c.