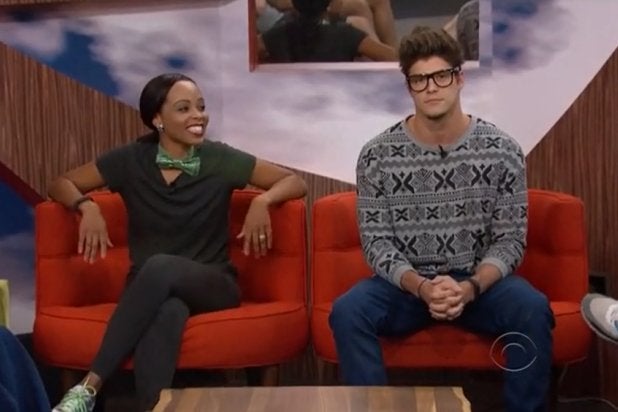 (Spoiler alert: Do not read on if you’ve not yet seen Thursday night’s double-eviction episode of “Big Brother 16.”)

It was a jam-packed night of “Big Brother,” and things were moving so quickly that alliances and betrayals were both exposed. It could be bad news for the exposed alliance, but things could still change. Julie Chen announced that both evicted Houseguests tonight were not only the first members of the jury, but they might have a chance to get back into .

Of course, she didn’t tell those remaining in the house this latest twist, which left one Houseguest seething after the second elimination. But first, it was down to Zach and Jacosta. After deciding to keep him for the numbers, the fractured-but-still-together Detonators sent Jacosta packing.

In flashbacks, we see that Derrick set the dominoes falling for Nicole and Hayden by exposing their plot to backdoor Frankie this week. He was on board with the plan, but only if Nicole succeeded in pulling it off. Since she didn’t, he was Team Detonators all the way and totally threw them under the bus. And just like that, the second sweetest showmance of the summer found itself on the Block courtesy of the Beast Mode Cowboy.

Nothing will top Zankie — the unexpected union of a straight man (Zach) and a gay man (Frankie) in a non-sensual but still rather sensual relationship.

After winning the HOH competition, Caleb quickly picked Hayden and Donny as his nominees, but Donny nearly killed himself winning the Power of Veto. He took himself off the block, and Caleb just as quickly put Nicole up. More than likely, he just had all three of them in his sight, and it didn’t really matter to him which one went home. He didn’t even vote with his alliance, showing how much he cared about the results of the eviction.

It was clearly retribution for their plan to backdoor Frankie and further solidified the Detonators control in the house. At the vote, Hayden was the one booted, but he too will have a chance to return.

At this point, things are not looking good for the unaligned folks left in the house. Donny, Cody, Victoria and the extremely angry Nicole had better make some big moves because they’re outnumbered by Detonators. And for an alliance that’s been crumbling almost since the day it was formed, the Detonators have managed to still control the game.

Now they have the numbers, so it’s going to be more crucial than ever for a nonaligned player to win Head of Household and control their own nominations if they want to have a chance of making it past Top 5. That said, most members of the Detonators have proven willing to jump ship if the right opportunity comes along, so things may be more in flux than they look.

Nicole absolutely lost it after Hayden left, lashing out at Christine and Frankie, calling them out as the masterminds behind the whole thing. Frankie can’t be pleased to have his puppet-mastery called out like that, as he’s done a pretty good job of manipulating the game without people letting on that he is.

Frankly, Christine, Derrick and Frankie are playing the strongest games right now. It’s really going to come down to which pairing of them wins out, as Derrick has proven willing to flip whichever direction will help his game out. As soon as two of them align at the right time, it might be the end of the road for the other. The rest of the Houseguests are just between them and the $500,000 prize.